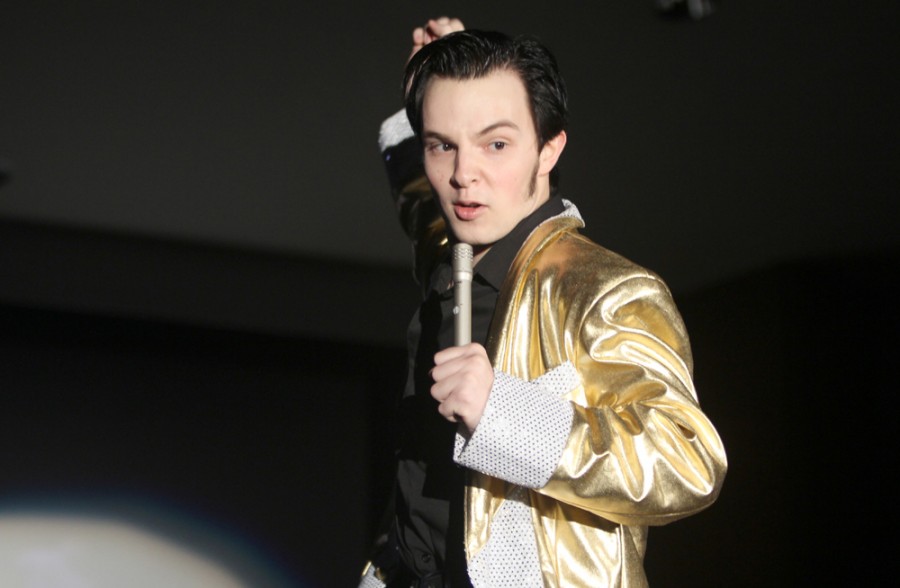 Janelle Monae was the woman of the evening Monday, taking the grand prize of $300 home with her as she claimed the title of grand prize winner of Vegas, a University Board sponsored lip syncing competition.

Janelle Monae, impersonated by Andrea Jenkins, took the stage with a high-energy choreographed dance.  Jenkins added pizzaz to her performance by having backup dancers.  The dancers accented the act and even threw balloons into the crowd.

UB Mainstage Coordinator Tylen Elliott conceived the competition opening up to a packed crowd with nearly every seat filled.  They packed the Grand Ballroom of the Martin Luther King Jr. University Union.

Audience members a roared in applause and exciement as each act was announced with a video of either an interview or music compilation of the actual celebrity before the acts came on stage. They gossiped about each performer prior to their performance. Many audience members complained about the length of the videos, yelling out phrases such as, “about time,” and “finally.”

The evening started with an act by Elvis Pressley, impersonated by Tanner Skym.

Skym donned an all black outfit highlighted by a gold metallic jacket and shook his hips to familiar Elvis songs shimming across the stage and even moving out into the crowd. The audience clapped along to the beats of the popular songs throughout the performance.

Beyoncé, impersonated by Shamerea Richards, appeared to be a crowd-pleaser. Mood lights surrounding the ballroom flashed on and off as Richards slowly moved up the catwalk with crowd singing along.

Richards performed to medley of Beyoncé hits including “Partition,” “Flawless,” and “Single Ladies.” She made sure to preform several signature moves like the some in “Single Ladies.”

The personal touch of a standing fan that blew back the hair of Richards while she performed added a special effect that other performers did not have.  Her act also included strobe lighting adding an effect different from others.

Richards went full-force her entire performance, which was evident when pieces of her wardrobe started to malfunction.  Her sky-high heels were off by the end of the number.

Other performances included a piano ballad by Alicia Keys, an intense choreographed medley of Ciara songs and a duo performance by Trey Songz and Chris Brown impersonators.

The judges critiqued the performers based upon their costumes, impersonation, lip-synching performance and overall performance, ending with Jenkins as the winner despite the large applause to have the Ciara performance win.

The next event for UB Mainstage will be “Karaoke and Cocoa” at 7 p.m. Dec. 10th at 7th St. Underground.