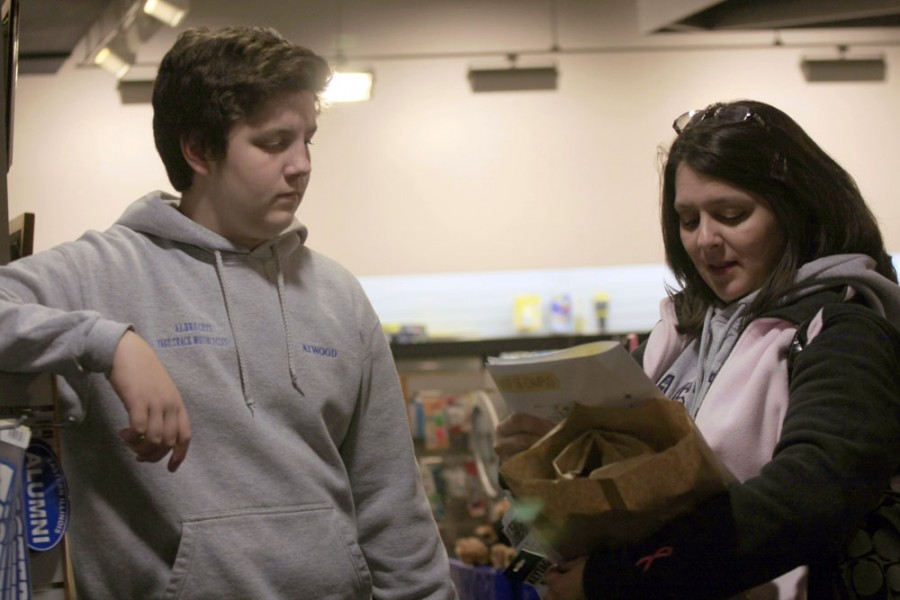 Chynna Miller| The Daily Eastern News Brendan Atwood, a prospective Eastern student, and his mom, Jamee Atwood, buy merchandise Monday during Open House at the Martin Luther King Jr. Union Bookstore. Jamee, a '91 Eastern alumna in the education department, talked about the differences on campus since her time at Eastern. Some of those changes included the Triad Dining Center being made into the Gregg Technology Center and the removal of the McDonald's in the Food Court in the Martin Luther King Jr. Univeristy Union.

Eastern saw the attendance for Tuesday’s Open House increase both with registered and non-registered students despite the below-average temperatures and the on and off rain.

Chris Dearth, the director of Admissions, said 480 families registered for the Open House and he saw a significant amount of families who just came.

This is up from previous open houses, which Dearth attributes to their aggressive campaign to get perspective students on campus.

“We are pushing campus visits a lot more than we have in the past,” Dearth said. “It is kind of like a test drive for students.”

He said as long as we get them here talking to students and faculty we can get them to feel more like a student at Eastern hopefully interesting them to stay.

He added if they get students to visit Eastern once or twice, there is a 60 percent chance they will choose this university in the end.

To ensure there would be a large number of visits to campus, Dearth said the admissions staff and him have been more aggressive about contacting prospective students, whether it be through calling or emailing.

“We have communicated with more students through email, through phone, through direct message a lot more than we have done in the past,” he said. “We are really trying to get them on campus.

He added he believed the weather did not hinder their attendance too much.

“A lot of families took a tour in the morning so it did not affect us too much,” Dearth said.

He also said he believed the date Open House was set on boosted attendance.

Many high schools in the country are off on these days leaving them time to go to events such as this one.

Justin Buchman, from Fishers, Ind., said he was very impressed by the experience offered at Eastern.

Despite being his first college visit, he was surprised how organized the entire experience was.

He knew where and when to go at all times with little struggle.

Buchman said he was also surprised by the size of the campus.

He is personally looking for a smaller school experience. He expected Eastern’s campus to be smaller.

Kara Hadley-Shakya, the associate director of admissions, added their upcoming Saturday events, where they offer tours across the campus as well as some other orientation-related activities, are getting a greater number of registrations.

More than 150 families have signed up for the two upcoming Saturday events for the semester.

This is the last Open House of the semester.

Dearth said the exact numbers of how many came as well as how many applied for Eastern at the several stations available in the Bridge Lounge in the Martin Luther King Jr. University Union will be available later this week.