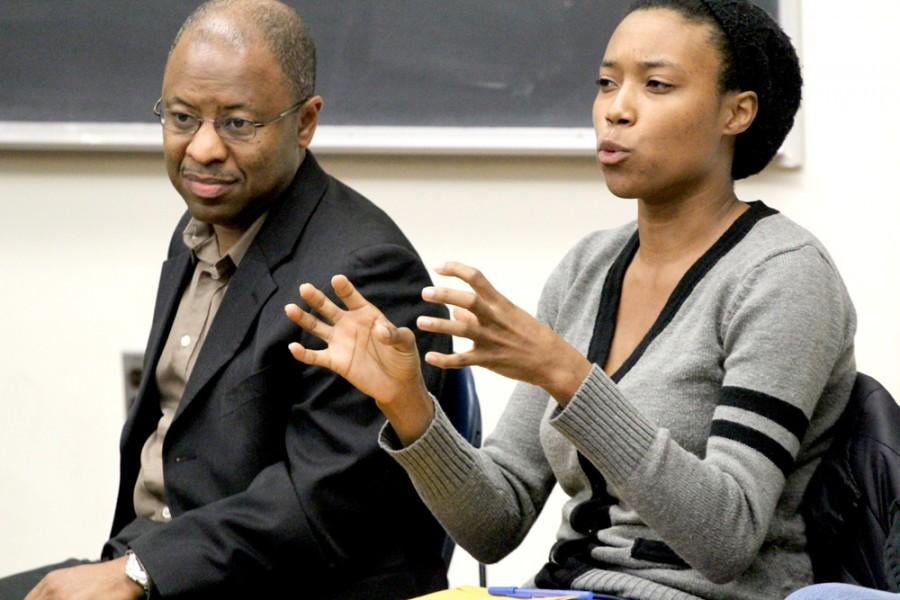 Jeniece Mitchell, a graduate student in the Department of Technology, participates in the panel during the NAACP Forum Monday in Coleman Auditorium. Mitchell talked about the discomfort she feels when she goes to minority sanctioned events and police officers are scattered among the room.

A panel of five sat and covered topics revolving around race, citizens’ rights involving police officers and the current climate of Eastern Monday in
Coleman Hall.

Hosted by the National Association for the Advancement of Colored People, the event was a way for students to ask questions regarding the campus climate, race and how police and students interact.

Bria Caldwell, the vice president of NAACP, said the event is important because students should know their rights when dealing with police officers as citizens.

Caldwell said she reached out to the Charleston and university police departments, but they declined because of scheduling conflicts.

Liz Arreola, the president of Latin American Student Organization, said the campus needs to make a lot of improvements because of the comments she has read on the social media app Yik Yak.

“I don’t feel like it caters to every minority student,” Arreola said.

Arreola said there is an underrepresented amount of Hispanic students on campus. She added when she was participating in the Community Coffee Hour on Friday, she remained silent for most of the discussion because she realized something that was shocking.

Yolanda Williams, a Gateway adviser, said she knew Charleston always had a race issue, but the campus always felt safe; Williams said there was a time when Eastern understood that. However, she said for the last five years she hasn’t felt that.

“For a lot of people, if you never been shown that something is a problem it won’t cross your radar,” said Kevin Anderson, a professor of political science.

Anderson said Eastern’s current climate is not as different from other university campuses.

All panelists were asked if they think racism still exists within the community and they all said yes, nodding.

Williams said when she was at Temple University, the cultural climate was different. She said the students did not see themselves as white or black — they were from Switzerland or Trinidad; however, compared to the climate of Eastern, the students here make the distinction of white and black.

Linda Scholz, a communication studies professor, turned the tables on the audience, asking them what their views on racism and what that meant to them.

Many students responded with black versus white, ethnocentrism, racial slurs and more.

Scholz said microaggressions could also be counted among racism with how things are said. She said some might assume someone is not smart enough because of the color of their skin, which is also a form of racism.

“You can be a really nice person and perpetuate racism and not even know it,” Scholz said.

Jay Ferguson, an attorney from Mattoon, said people ask him about racial profiling or unlawful issues.

Ferguson said this is not a problem unique to minority students, it a unique problem to those who are ignorant of their rights as citizens.

He said some students who come to him with issues might not know their rights and the laws.

The Fourth and Fifth Amendments are those that citizens can cite their rights when it comes to dealing with police officers and the law.

The Fourth describes the right to be protected from unlawful and unreasonable searches and seizures. The Fifth deals with citizens having the right not to perjure themselves, and also deals with Miranda Rights.

“In order for a law enforcement officer to interact with a citizen, they have to justify the interaction,” Ferguson said.

However, those who consent to searches are not near the law boundaries of the Fourth Amendment because of consenting, Ferguson said.

Ferguson said students and citizens can state verbatim they don’t consent to being searched; if the officer searches anyway they have to justify to the court their probable cause.

Students may also remain silent, which is part of the Miranda Warning, but if they choose to remain silent they need to stay silent, Ferguson said.

“You wield a much more mightier sword than you may realize or appreciate,” Ferguson said.

Jeneice Mitchell, a technology graduate student, said sometimes things are not outwardly expressed, she said things are said in a more subtle way.

“It has been implied through people’s actions—it can really dampen your experience,” Mitchell said.

Anderson said he is concerned that Eastern is not moving fast enough when it comes to diversity and race relations. He said the university may not know which direction to go. “Bringing in different groups of people enhances.” Anderson said, “Having people who are different does not diminish what is already here.”