Students to show their essence 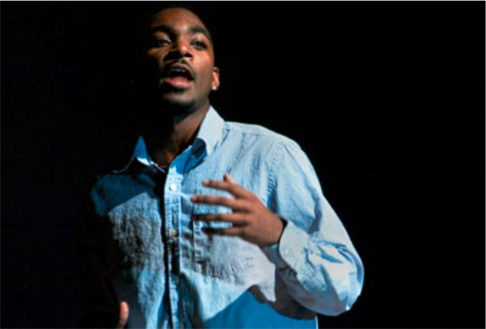 First runner up David Mitchell, a senior communication studies major, performs a sketch he wrote during the talent portion of "Essence of a Man" on Nov. 20, 2013, in the Grand Ballroom of the Martin Luther King Jr. University Union.

Five men will showcase their talents and skills through creative expression for the 12th annual Essence of a Man pageant at 7 p.m. Nov. 20 in the Martin Luther King Jr. Grand ballroom.

Brandal Miles, the 2013 Essence winner, said this year’s theme is “Royal Anarchy: Rise of a Lost Generation.” Miles added each part of the title means something specific; each of the five male contestants are made to be kings in the pageant. The anger and resentment within the kingdom also stands for issues those in the African-American community have faced.

“The pageant is a kingdom and within the kingdom there is a lot of turmoil,” he said.

Miles said Essence of a Man started in 2002 to allow young African-American men to show off their talents and creative expressions, but the pageant is not solely for African-Americans—any man on campus regardless of race can participate. However, those who do wish to participate must be a paid member of Black Student Union as well as have a 2.3 GPA.

The pageant is similar to its sister pageant Miss Black EIU, which began in the early 70s. Essence replaces Miss Black EIU’s African garb portion of their pageant with a talent show for the males, but since the show is much newer than the other, it is still growing and this is the second time they have had five contestants, Miles said.

“It’s about uplifting the black males on our campus,” Miles said

Miles said the pageant takes a lot of determination, because the men must be well spoken, outgoing, have a genuine positive attitude, participate in BSU events and be dedicated to the overall cause of the pageant, which is uplifting.

Whoever wins Essence is given a $500 academic scholarship as well as going on to represent the BSU nominee for the following Homecoming.

Miles said since the pageant is still new compared to Miss Black EIU, he hopes the event will increase in notoriety as it progresses over the years; as well as increasing the scholarship amounts. He added this year he was able to implement a second scholarship for second place winners at $250.

“When you win, it doesn’t stop at the pageant,” Miles said, who won 2014 Homecoming King earlier this year.