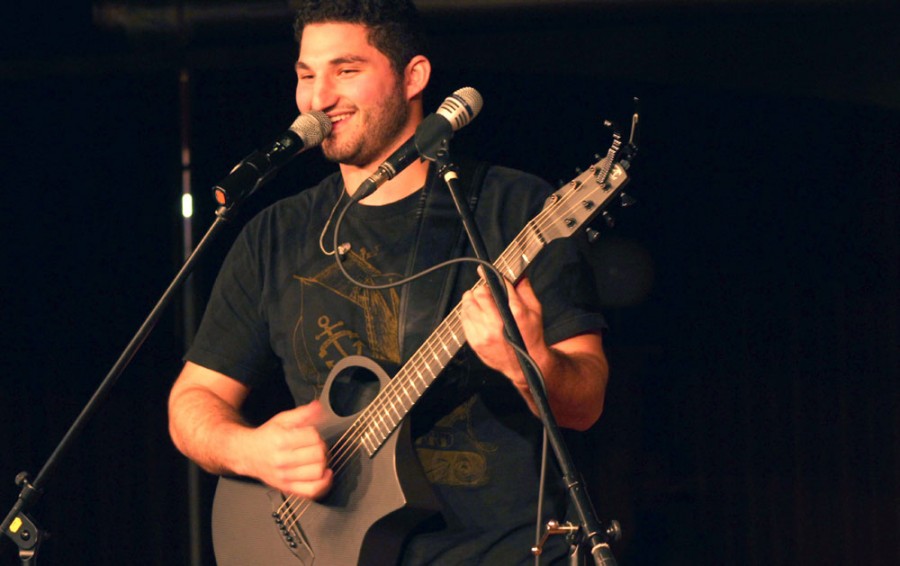 University Board Mainstage presented the second installment of its YouTube series Wednesday with a performance by artist Dan Henig.

Henig, a singer-songwriter from Nashville, Tenn., performed to a crowd of roughly 30 students at the 7th Street Underground.

A medley of 2013 pop hits, including “Cruise” by Florida Georgia Line, “We Can’t Stop” and “Wrecking Ball,” by Miley Cyrus, “Royals,” by Lorde and “Wake Me Up,” by Avicii, set the mood for the evening.

Quick-tongued Henig brought his own personality into pop hits and made each song his own by beat-boxing and adding vocal layers to every song.

Henig also performed a variety of original songs including “Natural Disaster,” “Lime in My Corona,” “Stranger On A Bus,” “Burn” and “Detroit.”

Bobby Thornton, an Eastern student, opened for Henig as a familiar face to the Underground.  Thornton also opened for the previous performer, Emily Hearn, when she performed as part of the YouTube series in September.

Thornton performed “Count On Me” by Bruno Mars, “Good ‘Ole Days” an original composition and “God Gave Me You” by Blake Shelton.  He performed the same songs when he opened for Hearn.

Henig made sure to keep Thornton involved in the show throughout his performance by speaking out to him in-between songs and bringing him back onstage for a duet of the popular country song “Wagon Wheel.”

The audience gave a warm response to the duet, as they sang along to the chorus.

Crowd participation was a big aspect of the night while Henig had casual conversations with the audience throughout his set.

Henig spoke of the classic “basic b****” joke and yoga pants with the crowd as well.

“I’ve had my fair share of pumpkin spice lattes in my years and I’ve realized something,” he said.  “They don’t actually taste like pumpkins.”

A rowdy crowd kept Henig on his feet, as many men in the audience would yell requests out to him and to one another.  Other audience members quickly became annoyed with the constant interruptions.

The audience was asked to pick what songs Henig would perform next, and got to choose whether or not he would perform more original songs or covers.  The crowd appeared to be more interested in pop and country covers than Henig’s original work.

Perhaps one of the most entertaining parts of the evening occurred when Henig brought a male and a female audience member onstage to perform with him.

Henig took their cell phones and proceeded to make a song out of their text messages.  Both audience members had their texts with loved ones brought to surface with the song Henig composed.

Henig ended the evening with more covers of pop hits including “Thrift Shop,” by Macklemore, “Drunk in Love,” by Beyonce and “Valerie” by Amy Winehouse.

Tylen Elliott, the UB Mainstage coordinator, took the stage at the end of the night to give away iTunes gift cards to audience members that entered a raffle when they entered the Underground.

UB Mainstage will present their next event titled “Vegas” Nov. 12.  “Vegas” will include performances by celebrity impersonators and a $300 grand prize.