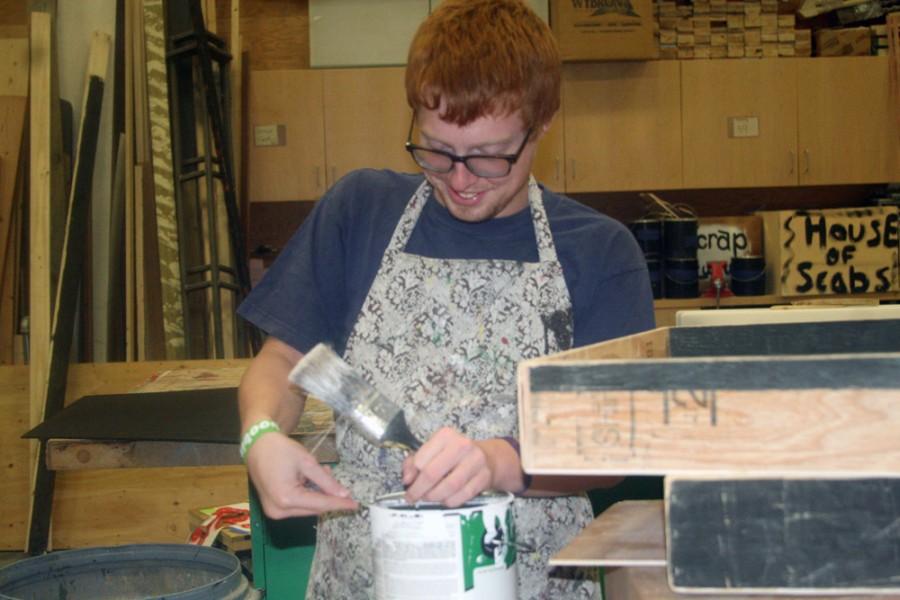 Chris Kesler, a junior theatre arts major, opens a can of white paint that will be used to paint a wagon for the play Carnival.

The Theatre department will continue its 50th Anniversary celebration next week with the production of “Carnival.”

“Carnival” musically tells the story of Lily, an orphan, and her relationship with a travelling carnival magicians and puppetteers.  Lilly falls in love with multiple members of the carnival and loses her happiness in the process.

The musical will also be performed at 2:30 p.m. Nov. 16.  All performances will be in the Theatre of the Doudna Fine Arts Center.

It is based off of a short story and film entitled “Lily,” released in the ‘60s.

Jean Wolski, director of the musical, said although the film was not a blockbuster hit, many appreciated it.

The story follows a classic story people who are lost and looking for their place in the world.

“You have these two roles, the puppeteer who is lost because he cannot dance anymore, and you’ve got this girl who has lost everything because everyone has died,” Wolski said. “Then the two of them find each other.”

Wolski also said the show is sweet, but also has a dark side.

“It’s not a typical musical from the time period when they were typically about boy meets girl, boy loses girl, boy gets girl back, with lots of numbers of song and dance, a couple of laments, and that’s about it,” she said.

“We were looking for something that the personnel would be able to do both in the theatre department and in the music department,” Wolski said.  “We wanted a smaller orchestra this year because of some changes in faculty, and you don’t want to go in with a huge musical and a big orchestra right away when you have new people coming in.”

For Timothy Renner, a music professor, “Carnival” will be his first musical production at Eastern.  Renner is the musical director for the musical.

Tickets for “Carnival” are $12 for the general audience, $10 for Eastern employees and seniors and $5 for students.  Tickets can be purchased at the Doudna Box Office.