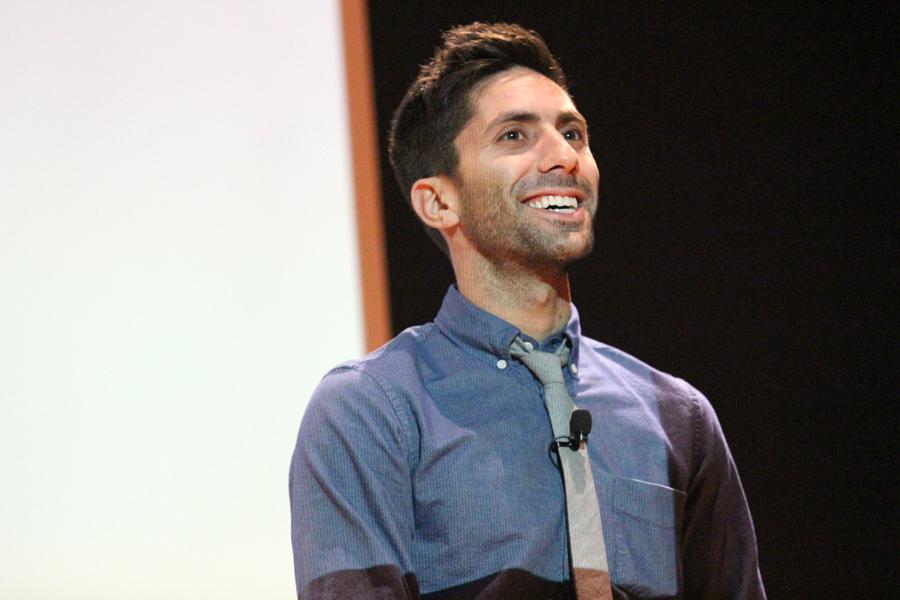 Nev Schulman, star of the television show 'Catfish', talks about his life, relationships, and offers advise to students during the Catfish On Campus event Tuesday in the Grand Ballroom of the Martin Luther King Jr, University Union.

The art of “catfishing” was brought to the campus Tuesday evening when Nev Schulman discussed his viewpoints on relationships, honesty, identity and self-esteem, especially on the Internet.

Schulman, a popular host, producer and photographer best known for his MTV show “Catfish,” helps those who believe they may be deceived by the other end of an online relationship.

One who is “catfished” is misled about the appearance or identity of the person they are talking to online.

Though it was his first time at Eastern, Schulman said he has recently been in the area. Kankakee was the location of a taping for the fourth season of “Catfish.”

A factor affecting Schulman’s popularity is because of his own experience in being “catfished.”

Schulman was involved in an online relationship, but when he met the woman he though he had been speaking to online, she was a woman in her 40’s with a husband.

Despite the negative impact some may think this would have on a person’s life, Schulman chose to look at it in a positive light.

The intent of “Catfish” is not to spread a bad light on those who hurt you, Schulman said, but to appreciate those who make you a better person.  Those people are your catfish because they get you through your day-to-day life.

“I urge you to keep finding people that can be the catfish for you,” he said.

Schulman released his first book titled “In Real Life,” in September.  The ideas he writes about in his book were the main topics he discussed at his presentation.

“I realized I had a story that was unique,” Schulman said. “There’s so many feelings and complications and shades of gray in life, so I wanted to talk about those sorts of things more.”

Schulman said he began to give talks on college campuses because of the age demographic he can reach out to.

“Students really seem to relate to me and appreciate what I was saying,” he said.

Although in the past, many people were taught not to talk to strangers, Schulman said, it seems as though those times are changing.

“It’s the context in which you engage in people,” he said. “It used to be: ‘don’t talk to strangers on the street,’ or ‘don’t talk to weirdos who drive up to you in a van,’ but now I think we need to update the context.”

He added when meeting people on Facebook, people now have to consider how we are connected to them and how we know who they really are.

In current times, it is simpler for people to make profiles based upon what another person’s interests are, Schulman said.

“At least before you had the ability to see the weirdo or dangerous person and make a judgment based on how they look, but now you can’t do that because they can look up exactly all of your friends or the guy you dream of dating,” he said.

Schulman said he does not think all those who create fake profiles are trying to hurt someone.

“There’s definitely a very clear distinction between people who are premeditated in their actions or because they are curious about themselves,” he said.  “Usually, I think it’s by accident, just sort of out of curiosity.”

Schulman finished his presentation with words of advice for college students trying to figure out their identity.

“Don’t tie yourself down to the path you think you want to follow,” he said.  “Be open to new experiences, because they may change your life.”