Robbin Terry and his paranormal playground

After purchasing Ashmore Estates in May 2014, Robbin Terry set himself on a mission of restoring the building and paying respect to its late tenants. 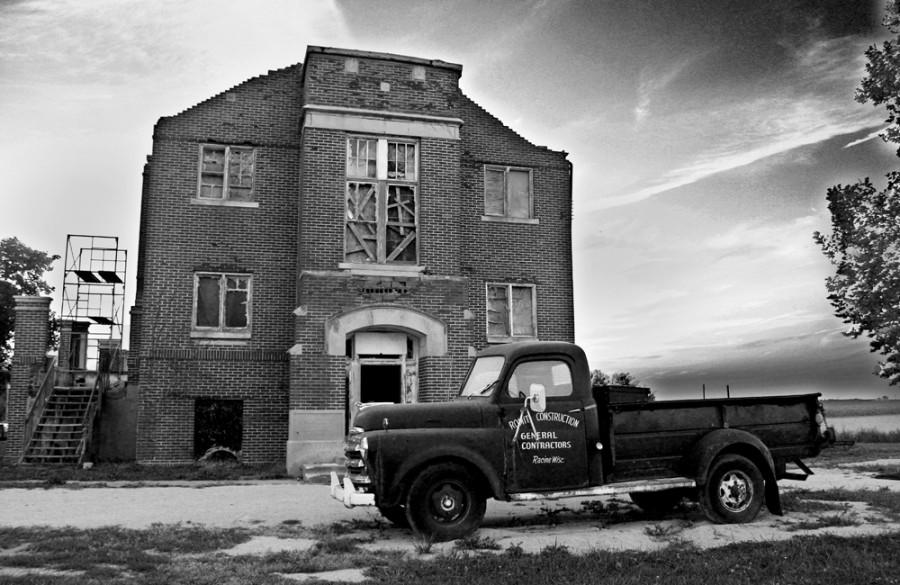 The long stretches of road, and agriculturally abundant appearance of Ashmore make one of its most famous landmarks feel even more out of place. Hidden between rows of corn and untrimmed fields, Ashmore Estates is as much a series of moments frozen in time as the spirits thought to wander through the building’s vacant corridors.

When Robbin Terry purchased the building in May for roughly $17,000, he knew it was unlikely he would see a dime of that money return to him anytime soon. The state of the building, however, was more than his sensitive spirit could handle, as long as he believed the lives of the estates’ previous tenants continued evolve as he stood before it.

The first time he even set eyes on the building before purchasing it was an experience he can only describe as supernatural.

“It felt like I was being grabbed, like something was saying ‘help us.’ And it wasn’t so much helping the spirits as much as helping their building,” he said.

Feeling sure his wife would put an end to his longing to own Ashmore Estates, Terry was surprised when she leaned to him in the car-ride home and softly assured him, “I think you should buy it.”

Terry has long harbored an affinity for worn-down, dated atractions. In fact, he has devoted the last 10 years of his life to renovation and investigation of dilapidated buildings thought to be housing ghosts.

Beyond a feeling, Terry cannot explain what compelled him to purchase a decaying theatre, abandoned gas station, a slew of junk cars, and his latest project, Ashmore Estates.

“The ‘ghost hunter’ I think is a bandwagon a lot of people are jumping on right now. I’m more interested in finding out why these people are here, and why they haven’t crossed over,” Terry said. “That’s the kind of thing that interests me more than just chasing ghosts and seeing that they’re here – I know they’re here. I don’t need to find that out. I need to find out why they’re here.”

The realm of the paranormal universe has always been a fascination for Terry, but it was not until he purchased a theater in Auburn that he understood the potential for exploration into that universe.

Terry and his wife bought the theater in 1999. Although they admit the lights turning on and off was a curious and frequent occurrence, they did not think their new home was haunted.

“When the paranormal team came in and investigated about 10 years ago, I heard what they captured and I had to get involved,” Terry said.

The couple now resides in the renovated theater, which doubles as a haunted attraction and they are both actively involved in multiple communities of paranormal investigators.

For some time, people looked at Terry like he was crazy, Terry said. But with the emergence of shows like Ghost Hunters and Ghost Adventurers (both of which have paid visits to the building), Terry believes the idea of ghosts has lost some of its shock-value.

“Before, people thought you were crazy literally running around and looking for ghosts, or Bigfoot or any of that stuff. But now it happens so frequently and they know about it that I don’t think it bothers them as much,” he said. “I think people are open-minded to it.”

Helping confirm this belief, Terry’s cell phone battery was depleted within 30 minutes of announcing his purchase, from the praise and support he received from the community.

“I want to make this place paranormal friendly,” he said.

The building was constructed in 1916 as an almshouse in conjunction with the Coles County Poor Farm. By law, each state was required to have such a facility, where those without accessibility to the basic needs were sent to live.

“They called them inmates,” Terry said. “You couldn’t leave, because you had nowhere to go.”

During this time, the land stretched about 260 acres, where tenants farmed crops and sold food in order to survive.

According to an urban legend, the building burned down in 1959, when a candle set a small girl’s dress ablaze, and spread to the rest of the property.

The building was later reconstructed with brick and cement, and purchased by Ashmore Estates, Inc for use as a private psychiatric facility. It is also believed that about 200 patients died during the building’s use as a mental institution.

People attribute this legend to the disembodied voices and enigmatic figures that are reported passing through the building’s hallways.

The hospital closed in 1987 and remained abandoned until 2006, when it was re-opened as a haunted house. A 2013 storm, however, tore the roofing off the building with winds up to 100 mph, at which point the property was turned over to Terry.

Despite having run a haunted house of his own, Terry said he made an ethical decision to stop using Ashmore Estates as such under his ownership.

“Some of the stuff like the graffiti on some of the walls in here –spray painting of the word ‘die’ – I painted over it,” Terry said. “I think that is disrespectful because those people have passed away. We don’t need to remind them by writing it on the walls.”

Instead, Terry has plans to install infrared lights, and open the building for private tours and professional investigations.

When his work with Ashmore Estates is through, however, Terry doubts he will buy more property.

In the meantime, Terry will continue to repair the oppressively boarded windows and other compromised elements of Ashmore Estates.

“We’re trying to put it back the way it was when they were here, because we think that that’s the way they would have probably best liked it,” he said. “Adding windows and opening it up so that the spirits can see out and things like that, I think that’s what we’ve done. I’ve heard voices in here myself, and they sound positive.”