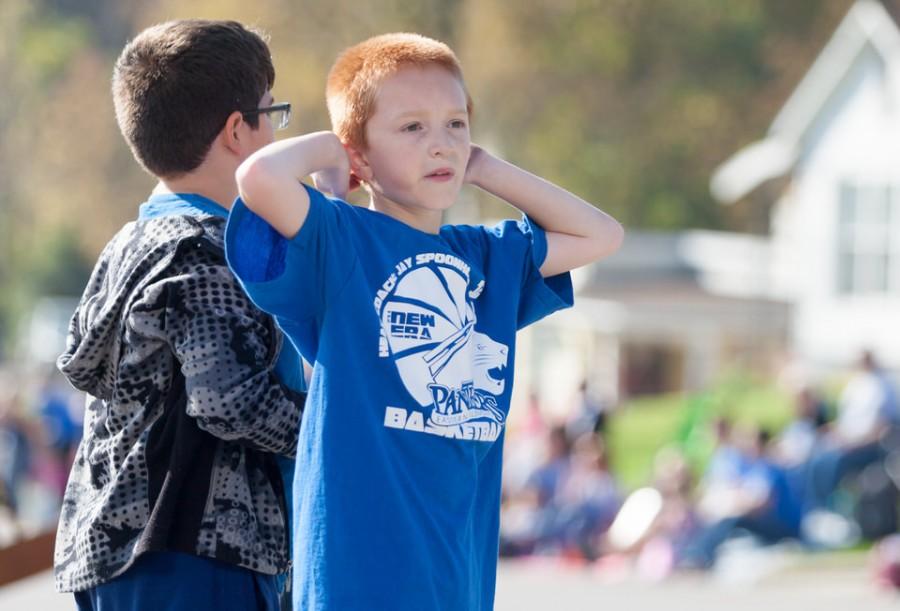 Eastern students, alumni and Charleston residents lined the sidewalk of the parade route, which started at the corner of Lincoln Ave. and Seventh St. and led to Sixth St., Polk Ave. and Division St. until it ended at Grant Ave.

Attendees, dressed in their best Eastern attire, watched from the sidelines as various trucks, floats, and marching bands performed.

Parade-goers jumped at the chance to collect as many freebies as possible throughout the parade. Many even had special tactics to getting what they wanted, such as dancing for candy.

Kyle Ross and Eion Dahlke, two young Charleston residents, chose to dance for the parade passing in front of them with the hopes of collecting extra candy.

“It’s fun and we like to make up big moves,” Ross said. “My favorite is the ‘Wiggler Jiggler.’”

Other attendees could be seen on the sidelines dressed in costumes and holding signs with phrases such as, “I Want Candy,” and “Candy Please.”

The parade, which is an annual Homecoming tradition, began at 9:30 a.m. Saturday.

Police cars and fire trucks led the parade down Seventh St. and were followed by cars driving members of Eastern’s Board of Trustees, President Bill Perry and Dan Nadler, vice president of student affairs.

The 2014 Homecoming King and Queen Brandal Miles and Alexis Lambert, and Prince and Princess Tylen Eliott and Catie Witt followed behind the administrators’ vehicles.

The Pink Panthers and Eastern’s marching band continued to excite the audience as they passed.

Various Charleston businesses and Eastern club representatives walked in the parade, passing out candy and fliers with special offers from their organizations.

Some groups put on costumes to add to their entertainment factor, as Santa and Mrs. Clause, and the Smurfs walked the streets of downtown.

A popular theme among floats was the music playing from the cars that drove them down the route. Songs such as “Happy” by Pharrell Williams and “Anyway You Want It” by Journey could be heard throughout the course of the parade.

Sorority and fraternity members rode in the beds of trucks that carried displays promoting their houses.  Many created banners that said the popular phrase, “Welcome to the Fabulous Chuck Vegas.”

The parade ended roughly an hour after the 9:30 a.m. step-off time.  Many attendees followed the parade to O’Brien Stadium where they began their tailgating for the football game.