Panthers to take on conference rival 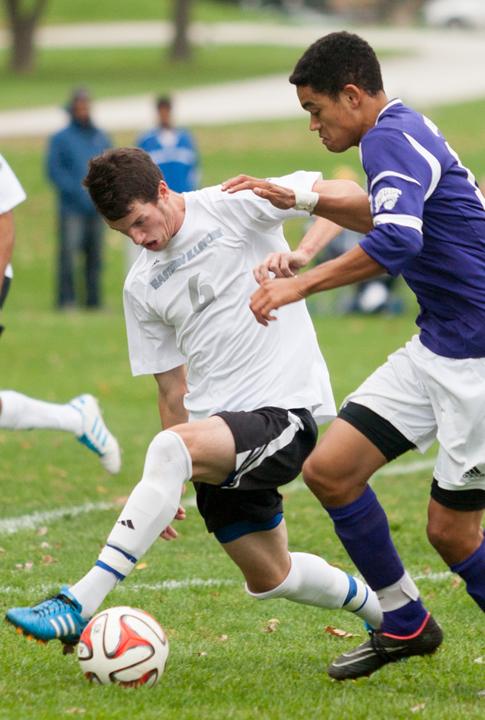 Junior Kyle Callender goes in for the slide tackle against an opponent during a match against Western Illinois on Saturday at the Eastern practice field. The Panthers lost to the Leathernecks 1-0.

The Eastern men’s soccer is in a must-win situation against conference foe IPFW at 1 p.m. Sunday at Lakeside Field.

Eastern lost to IPFW on the road last year 3-1. Eastern however, leads the all time series 8-4, but has lost two of the last three matchups.

IPFW is 4-7-4 this year and 2-2 in conference play. IPFW’s wins came against IUPUI and Oral Roberts. Fort Wayne has struggled on the road with a 1-3-2 record and is currently on a two-game losing streak.

Eastern heads into this matchup with a 2-10-1 record and is winless in conference at 0-3-1. Eastern is currently on a four-game losing streak with two straight losses on its home field. The Panthers’ record at home is 2-3-1.

“They are a very possession oriented team,” he said. “IPFW is a very good side, they’ve had some very good results, they’ve won two games in conference so their mindset coming in is going to be: If we beat Eastern, we’re in the tournament.”

Corey Tom and Austin West are the leading goal scorers for Fort Wayne with four goals each. Tom also has an assist and is the teams point leader with nine points. West leads the team in shots with 29 and shots on goal with 12.

Hansen is looking for senior leadership in this crucial game.

“On senior day you are looking at your seniors,” he said. “They’ve got their family here at the game and you really look for them to set a tone, but I’m really just looking for any person that steps on the field to step up. Anybody that wears that jersey on Sunday needs to step up.”

Fort Wayne has split time with their goalkeepers Cody Schweitzer and Raphael Kotzock. Schweitzer is a freshman and has started eight games this year and has a record of 2-5-1. The freshman has one shutout and has made 37 saves. Kotzock is a red-shirt sophomore and has also played in eight games. His record is 2-2-3 and he has three shutouts.

Hansen is going to change up some things in the lineup, but not the game plan.

“You will see some changes in personnel from the mid-week game and obviously from the game on Saturday, but in terms of what we’re trying to do, we haven’t changed that all year,” he said. “I think you are going to see two desperate teams to get a win on Sunday.”

Hansen is focused on making this game a full team effort.

“One of the biggest keys is for us to make sure we are competing as a team on Sunday,” he said. “Not playing as individuals but competing as one team. We have to get a win. There is no other way for us to get into the conference tournament at this point, we have to win out from here.”