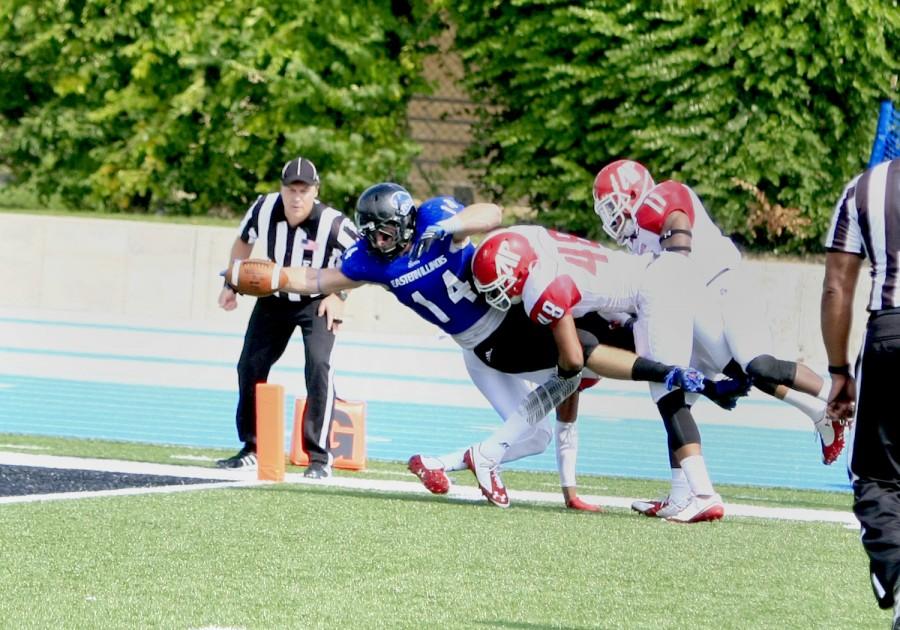 After closing in on the Eastern football team, with a six-yard touchdown pass, Southeast Missouri allowed 38 unanswered points, as the Panthers won 52-13 in Cape Girardeau, Mo.

Eastern improved to 2-1 in the Ohio Valley Conference, while the Redhawks dropped their second league game in a row and fell to 2-2 in the OVC.

Following Kyle Snyder’s six-yard touchdown pass that came off a little pitch by the passer to Spencer Davis, the Eastern offense took advantage of good field position and four turnovers forced by its defense.

Whitlow led the Panthers on an 11-play, 79-yard drive, which he finished with a 13-yard rushing touchdown – his second of the first half. That score gave the Panthers some breathing room, as their lead was extended to eight. The Redhawks could not find an answer for the Panthers defense.

Snyder, who averaged more than 50 rushing yards per game and had six rushing touchdowns entering Saturday’s game, finished with only seven rushing yards on six carries. The Panthers were able to stop the entire Southeast Missouri rushing attack, as the Redhawks rushed for 84 yards.

Eastern took a double-digit lead into halftime for the second straight week, but this time the Panthers did not give up their lead.

The first two Panthers’ scoring drives in the second half covered a total of 38 yards, as the offense was set up after Eastern stopped a fake punt and took over at the Southeast Missouri 25-yard line. Then, Anthony Goodman intercepted Snyder and returned the ball to the 13-yard line.

Taylor Duncan capped off the first short scoring drive, with a one-yard rushing touchdown that put Eastern ahead 31-13. The Panthers were helped out later in the quarter after Goodman’s interception.

After getting to fourth down and six from the Redhawks’ 11-yard line, Eastern coach Kim Dameron called the field goal unit, but Southeast Missouri was called for a penalty. The five-yard infraction brought the Panthers’ offense back on the field, where Whitlow rolled to his right and threw a five-yard touchdown pass to Drake, giving them a 38-13 lead with 4:57 left in the third quarter.

Drake finished with a team-high seven receptions, 110 yards and two touchdown passes. His first touchdown grab came in the first quarter off a 50-yard catch. Whitlow added to the lead in the fourth quarter, scampering in from two yards, capping off another long drive for Eastern.

The Panthers’ defense not only kept the Redhawks out of the end zone in the second half, it also knocked out Snyder and starting running back Lennies McFerren from the game.

Eastern had four interceptions, including two from safety Jourdan Wickliffe. He also had two interceptions in the Panthers’ previous game against Eastern Kentucky.

Anthony Standifer had Eastern’s first interception of the game near the end of the first half, when he beat out a Redhawks’ receiver inside the Panthers’ 30-yard line with less than a minute to go until halftime.

Whitlow extended his streak of no interceptions to four, as he finished 17-of-30 for 213 yards and two touchdowns, while rushing for 75 yards on 15 carries. Shepard Little led the Panthers’ running game, with 103 yards.

The Panthers’ final touchdown of the game was a 96-yard run by Jimmy Lera that tied a school record set by Poke Cobb in 1976. The Panthers ended with 335 rushing yards against the Redhawks.

Eastern returns back home for the first time since Sept. 20, as the Panthers host Tennessee State at 1:30 p.m. on Oct. 25, at O’Brien Field for Homecoming.