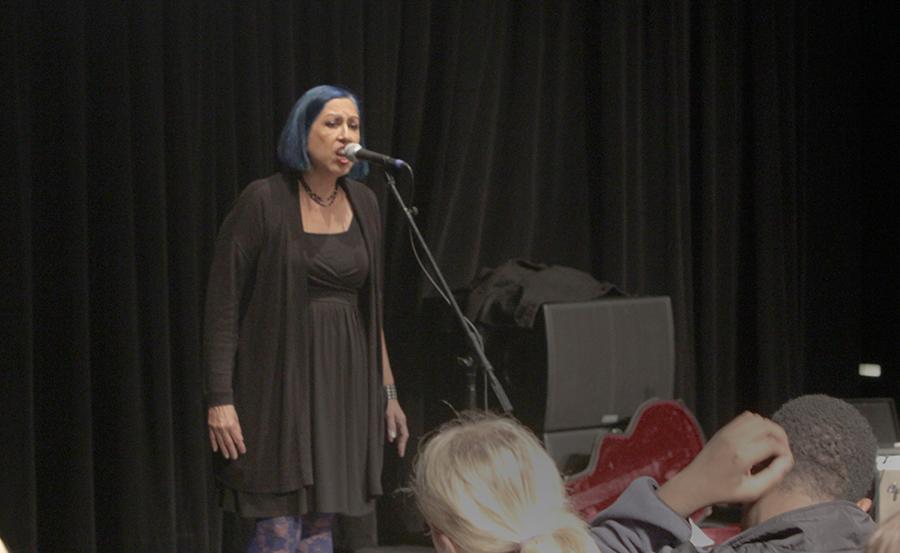 Author Alice Bag performs "Angelitos Negros," a song that she used to put her childhood in perspective after reading an excerpt from her book "Violence Girl: East L.A. Rage to Hollywood Stage, a Chicana Punk Story.

Singer, blogger, author and activist Alice Bag inspired the audience with her passionate performance Thursday in the Black Box Theatre at the Doudna Fine Arts Center.

The name of her book came from the violence that she experienced in her life, such as her father hitting her mother.

As a child, she “couldn’t always stop the violence” happening, and music gave her an avenue to control something.

She said people would say she was angry and scary on stage, which gave her a reputation for being violent.

However, music helped her through these violent times.

“Very early on, I was writing music,” she said. “It felt good, like it was therapeutic. It felt like a release, and made me feel powerful.”

She said looking into the audience made it seem like she had the power to change the world.

“The room was endless; the (theater’s) blackness was the universe,” she said.

There were also times when she felt like an outsider or a weirdo as a child.

“It was nice to go to the punk scene and see people who were weirdoes in their families and neighborhoods,” she said. “When we got together it was like we were one tribe.”

The stories in her book originated from various posts from her blog.

In one of the stories, she describes watching the movie “Angelitos Negros,” a movie about a man who marries a racist woman and how that shaped her strong beliefs.

“It was the first time I really thought about how ubiquitous and insidious and underhanded racism and sexism is,” she said.

Along with reading from her book, Bag also sang various songs, which each had their own stories behind them as well.

One of the songs, “Babylonian Gorgon,” was written by one of Bag’s band mates after a writer had described her as such after seeing one of her concerts.

Meanwhile, a cover of “Moonage Daydream” showed the influence glam artists like David Bowie had on her music.

She said she discovered glam artists in her teens such as Elton John and David Bowie.

Bag described them both as having stood out to her with their “ubiquitous genders” and impressive performances.

She also spoke about how David Bowie, as one of the first people to be open about bisexuality, made her feel more comfortable about her own sexuality.

When Bag started getting into glam, there were not a lot of woman in that scene.

In the show, she described how many women were groupies, and she got her start in the punk scene trying to become a groupie with her friends.

She soon realized that being a groupie was not going to be enough for her.

“I didn’t want to play a supporting part in someone else’s life,” Bag said. “I wanted to be the star in my own life.”

This realization helped her find the courage to start her own band.

Bag also sang a song from the movie “Angelitos Negros” as well as a cover of “Oh Bondage Up Yours!”

A lot of the audience members could be seen nodding their heads in time to the music as Bag sang and strutted across the stage.