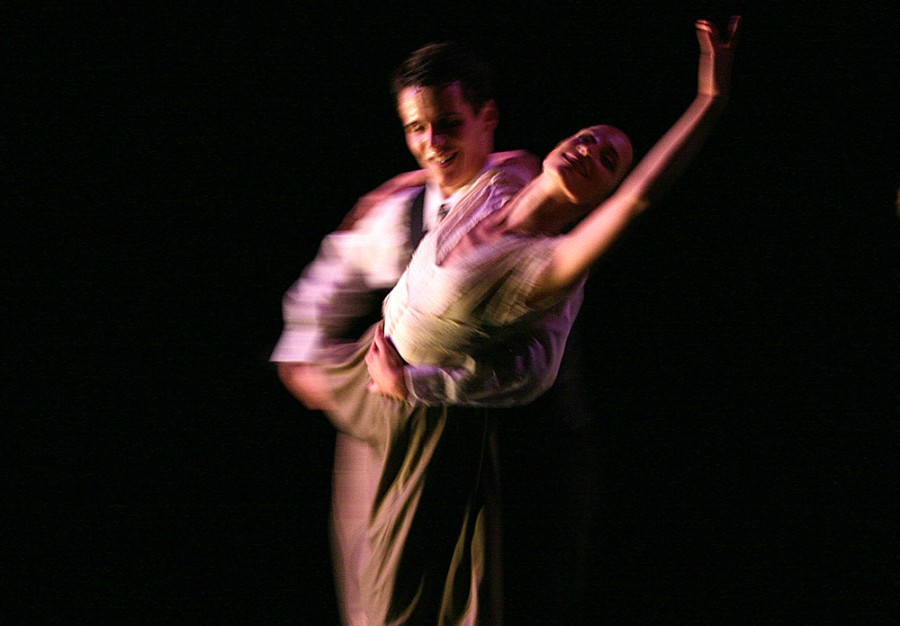 Brandon Harneck and Tenley Dorril dance to the scene "True Love" during the Thodos Dance Chicago performance Saturday in the black box of the Doudna Fine Arts Center. The dance told the story of two young young lovers and the maturing of a relationship over time.

Thodos Dance Chicago is making their return to Eastern with a new contemporary story ballet depicting the close bonds between Helen Keller and Anne Sullivan will take place at 7:30 p.m. Friday in the Theatre in the Doudna Fine Arts Center.

Brought back to Eastern as part of Doudna’s “Best Of” series, the two award-winning choreographers, Melissa Thodos and Ann Reinking, will be presenting “A Light in the Dark.”

“A Light in the Dark” tells the story of Keller and Sullivan’s relationship, revealing how Sullivan, Keller’s teacher, led Keller, who was blind as well as deaf, helped transform her into the educational, active and intellectual celebrity she became.

Dan Crews, the director of patron services at Dounda, said this is a relatively new program, only being preformed previous in Fall 2013 in Chicago, where they are based.

Based on the novel, “The Miracle Worker,” the dance will be telling the audiences of the transformation Helen Keller went through to become the world-renowned writer and speaker advocating for people with disabilities along with various other social issues.

Thodos, one of the choreographers, has been choreographing for over 25 years. Her work has been nominated for many awards and her work has been presented all over the world. Reinking is a Tony Award winner for Best Choreography for the 1997 Broadway revival of the Bob Fosse musical Chicago.

After the reopening of Dounda in 2008, the center has been a new home for dance. Previously unable to support several dance groups, the Doudna staff has worked to provide Eastern students and Charleston residents with more professional dance ensembles.

Crews said those interested in dance, contemporary and traditional alike, would certainly enjoy the dance ballet.

“One of the things we at the Doudna have learned from audience feedback that many local people have appreciated that the DFAC has presented dance,” Crew said. “For a long time the closest you would have to travel would be to the Krannert Center at the University of Illinois to see professional dance presentations.”

Crews said this would be a complete departure from their performance last year.

“Last year’s presentation was contemporary dance presentation based upon the best selling book, “The Devil in the White City,” Crews said.

Tickets for the performance are $15 for general public, $12 for seniors ages 62 and up and $7 for students.

Tickets can be purchased online at www.eiu.edu/doudna or at the Doudna Fine Arts Center Box Office.