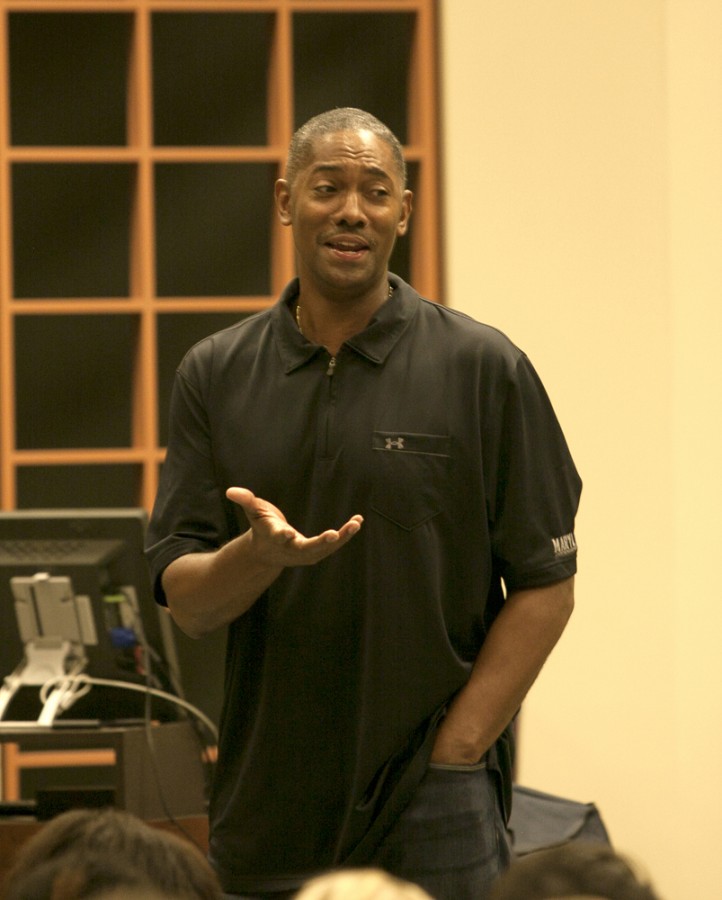 Adrian Branch, who had played a reserve role on the Los Angeles Lakers when they won National Basketball Association Championship in 1987, spoke to student athletes to inspire them to stay down the right path Tuesday.

Using demonstrations with students from the crowd and stories from his past, Branch told a cautionary tale of a successful athlete in college and high school who fell making the wrong decisions in life.

Branch said his ego and mistakes made had risked what he wanted in life as well as skewed his perceptions of what success is. In high school, he had been kicked off the team for a time because he was “big-headed.”

He again was kicked off the team for a short while at the University of Maryland for driving a vehicle with a passenger smoking marijuana in the back.

With focus and strengthened love in Jesus Christ, Branch said he was able to focus his life and have a successful NBA career. He said through faith he found new desires that made him more full in life.

Branch said it was important for the student athletes to keep focusing on their goals, despite the many distractions at college. Even if they fall, the battle to reach their desired goals is not over.

His speech focused around choices as well as the importance to make sure what are the right choices.

“You are not born a winner or a loser. You are born a chooser,” Branch said.

He told various stories of prospecting athletes, he knew, that had made the wrong choices dismantling their shots of hitting the major leagues, whether it was by getting caught with marijuana or being accused of rape.

He said he learned over time that making the right choices, he was fortunate enough to avoid to major consequences that come with doing destructive things.

At one point, he unknowingly drank beer in front of Ace. Ace then told him to make a choice.

“Are you fixed up or mixed up,” Branch said.

People like Ace changed his ways and brought perspective to his life making sure he paid attention to the important things, he said. Branch added student athletes need to keep this in mind when soaring through life.

Eric Schultz, the director of compliance in the athletic department, said it is important for the student athletes to listen to one of their own. He said he believed those who went gained perspective of their athletic and academic goals. He said he thinks they learned a lot.

“Kids relate. They want to hear it from someone who has been there,” Schultz said.