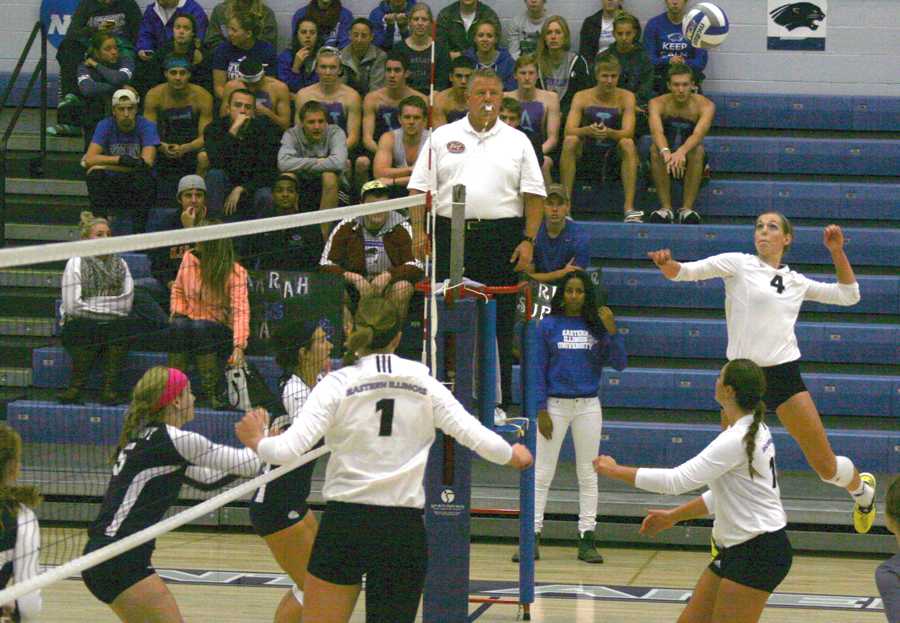 Outside hitter Abby Saalfrank prepares to hit the ball against Belmont on Sunday at Lantz Arena. The Panthers lost in give sets to the Bruins.

Abby Saalfrank’s dominant performance on Saturday for the Eastern volleyball team was overshadowed by the final score.

The five-foot-11 outside hitter picked up her ninth double-double of the season, but the Panthers lost a five-set affair with the Belmont Bruins after surrendering a 2-1 game advantage. Saalfrank compiled 18 kills and 14 digs in the intense five-set match.

“It was one of the most grueling matches, in the aspect that we have a winning tradition in our gym,” Saalfrank said. “This loss not only hurts our record in conference, but it really hit home that our home gym winning streak has come to an end.”

The Panthers had won nine matches in a row at Lantz Arena, dating back to 2012. Their record currently stands at 7-10, and 1-3 in Ohio Valley Conference play.

“Matches like that will always stick with you; they never really go away,” Saalfrank said. “It stays with you until you see (the opponent) on the court again.”

Unless they draw each other in the OVC tournament, this was the only scheduled matchup between those two schools this season.

Eastern will continue their four game home stand this week, with matches against Murray State and Austin Peay, on Friday and Saturday, respectively.

The Governors are led by senior Jada Stotts, who recorded her 1,000th career dig in a victory over Morehead State on Saturday. She recorded seven kills and eight digs that night, and currently has 1,063 kills and 1,004 digs for her career

Following Saturday’s game she became the 7th player in school history to record both 1,000 kills and digs during her career. Stotts is originally from Hoffman Estates.

As for the OVC’s other unbeaten team, the Jacksonville State Gamecocks find themselves on a four game winning streak.

The Gamecocks defeated Tennessee Tech and Tennessee-Martin last week to improve to 8-8 overall and 4-0 in OVC play.

The last team the Gamecocks started OVC play 4-0, they won the OVC title in 2009. That was their last conference championship to date.

Freshman Charis Ludtke led the team with 27 total kills in those two matches, including a season-high 19 kills against UT-Martin on Saturday. She also tied a season-high seven kills in Tuesday’s victory over Tennessee Tech.

OVC Players of the Week

Two of the OVC players of the week, this week, come from the state of Tennessee.

Alex Martin, a middle backer from Belmont, was named the defensive player of the week, following a solid week. The six foot senior recorded five kills and seven blocks in a road victory over Tennessee State.

She ended the road trip, nearly getting a double-double against Eastern. On Saturday she recorded 10 kills and eight blocks in the five-set overtime victory over the Panthers. She also added three digs in that contest.

She followed that up with a 28-assist, three-kill performance in the victory over Morehead State, in route to being named the OVC setter of the week.

The offensive player of the week was Scottie Ingram of Murray State. Ingram recorded double-doubles in both matches last week against Eastern Kentucky and Austin Peay.

In the win over Eastern Kentucky she recorded 24 kills and 17 digs for the Racers. She also had 10 kills and 11 digs during the loss to Austin Peay.