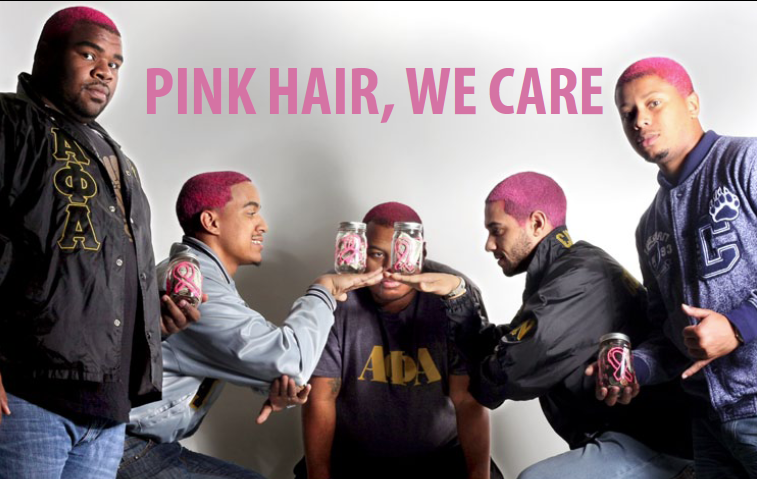 Cameron Douglas, the president of Alpha Phi Alpha said, last year was their first “Pink hair, We Care,” event, which garnered $250 in donations to the cause. He said the organization is working on making the fundraiser an annual event.

Breast cancer not only affects women, but men as well so this is a way to bring awareness and educate both women and men about the issue, Douglas said.

“We want (people) to really care about this,” Douglas said.

Douglas said men in the fraternity are expected to dye their hair pink and keep it like that publically, but if any of the members have long hair they should only dye the tips.

He said last year there was a hierarchy quota that members needed to fill, which was represented like a pyramid. Depending on who and what members did outside of the organization determined how high they were up on the pyramid.

Douglas said this was a success because they had members of their fraternity with long hair in the past whom people wanted to see with shorter hair, so students are encouraged to donate more to see that member with shorter hair.

He said the members will also hand out pink ribbons to students while educating those on breast cancer facts, especially the men, because many don’t know they can contract the disease.

“This can happen to (men) too, but at a (smaller) rate,” Douglas said.

Entering their second year of the fundraiser, Douglas said they are trying to reach out to other organizations and spread the word. This year’s goal is to raise $400, which will all go to the Sarah Bush Breast Cancer Awareness Center.

“We just want the younger and older women to be aware,” Douglas said.