Leaving Iowa leaves much to be desired 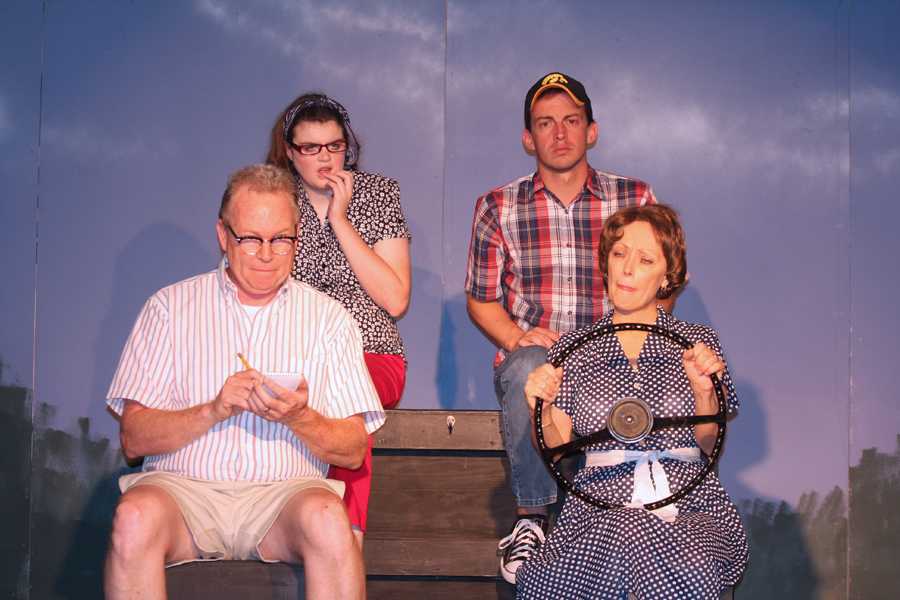 The stage was made up of a dull excuse of a car, simply painted backdrop, and the six actors who made up the cast of “Leaving Iowa,” were not much better.

The Charleston Community Theater’s production of “Leaving Iowa” left most of the play up to their viewers’ imaginations.

“Leaving Iowa” began with an introduction to the Browning family, who were on one of their many family trips. This trip in particular was to Hannibal, Mo., home of Mark Twain.

The play jumps forward three years later and takes a sentimental turn when the family explains that the father, played by Tim Mason, passed away and his ashes have been left in the basement.

Don Browning, the main character of the play and the son in the family, played by Matt Mattingly, takes it upon himself to travel wherever he must go to spread his father’s ashes where he wishes to lie.

“Leaving Iowa” continues as a tale that jumps between the family trip to Hannibal and Don Browning’s trip with his father’s ashes.

Browning faces many troubles along the way, such as guilt for not attending his father’s retirement party, which easily provides a sense of sentiment to the play.

Among those in the cast are the Little Sis, played by Leah Piescinski, and the mom, played by Victoria Bennett.

Mom and Sis are easily the least desirable members of the cast because of Sis’s obnoxious, nagging attitude and Mom’s constant look of boredom throughout the play.

The stand out performers throughout the play were definitely Earl Halbe and Faith Ramsey who played an array of characters such as Uncle Phil and Aunt Phyllis, the Civil War Guy and Civil War Assistant, and the Hotel Clerk and Drunk Lady.

Their portrayals of various characters left the audience much more entertained than the Browning family managed to do.

“Leaving Iowa” was performed at the Tarble Arts Center, which may also be a cause for the unpleasant feelings one may hold toward the play. Tarble seemed to be colder than necessary and did not provide many comfortable seats for the show.

In addition to the chill and less than favorable seating, the actors seemed to be talking a bit too loudly for the small area they were performing in.

Perhaps this is why plays are supposed to be performed in a theater.

“Leaving Iowa” was performed to an audience of 25 community members, mostly over the age of 50.

Perhaps the worst part of this production is the timeliness of the performance, or lack thereof. “Leaving Iowa’s” duration of two and a half hours was roughly an hour too long. Writers should consider revising the screenplay into a version that does not last longer than the average Hollywood film.