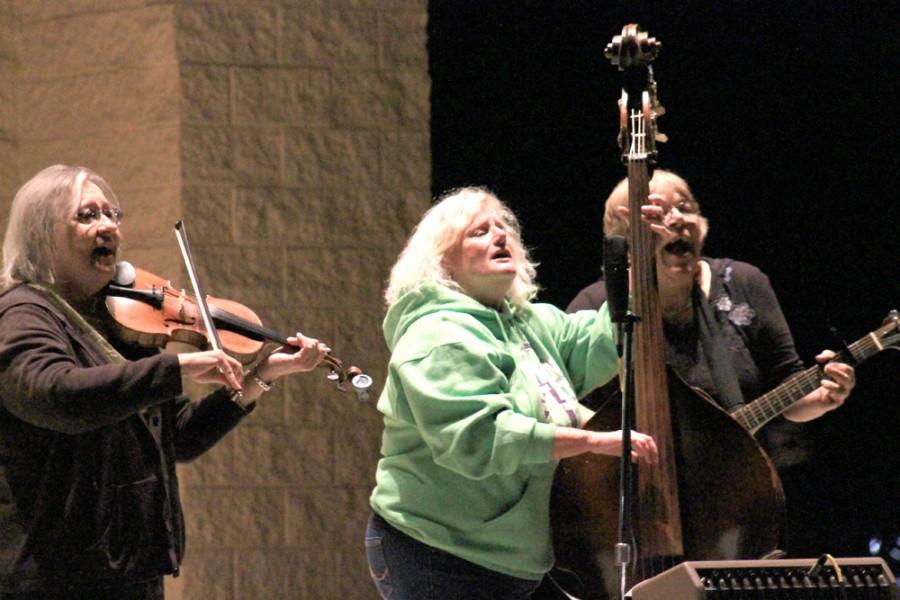 Motherlode, a three-piece acoustic band from Charleston, performs at Daum Amptheater Tuesday in Kiwanis Park. The band performed a mix of folk and bluegrass music.

The air was crisp and the sun was setting as the opening strings played as Motherlode stepped into the spotlight at Daum Amphitheater.

Despite the cool covers of older tunes, the amphitheater’s lighting left much to be desired.

Motherlode, a three-piece acoustic band from Charleston, brought a mix of acoustic, folk and bluegrass Tuesday to the Concert in Park in Daum Amphitheater in Kiwanis Park.

Motherlode opened to a 20-person crowd at 7 p.m.

The band plays a number of instruments including the fiddle, mandolin, acoustic guitar and string bass.

Motherlode opened with crowd-pleasers “Stand By Me,” and “Benji.”

The band continued to switch on and off who would belt out solos as the main singer as well as switched between instruments on stage during the songs “Don’t Mean a Thing,” and “Be My Baby.”

These transitions were seamless and each the members had a good grasp on the vocals and every instrument.

The ease at which the performers transitioned between instruments was impressive and calming.

The band kept audience members on their feet as they put a new spin on popular songs. They sped up slower tunes to keep the mood light.

As the night went on and the sun began to set, many families came to sit on the brick steps of the amphitheater and listen to the acoustic bluegrass music.

Motherlode appeared to have a personal connection with many of the audience members, as they freely conversed with people showing up late and those in the crowd.

Unlike with some concerts, the banter between the band and the audience never felt forced or awkward. These breaks in between songs were welcomed. The time spent conversing did not derail the concert.

The audience consisted of many families with young children, who spent most of the concert dancing in the grassy area between the stage and the seats.

The chilly air and darkness of the amphitheater did not stop those in attendance to have a good time.

Motherlode is a tight-knit trio that seamlessly has no problems performing in front of a crowd.

The mix of classic songs from the ‘40s to more modern tunes kept the crowd consistently entertained.

Motherlode ended the show with a dedication to the HOPE Center Against Domestic Violence.

Motherlode will perform again at the Night of Hope, which begins at 6 p.m. Friday at the Jackson Avenue Coffeehouse.

Night of Hope is a fundraiser for HOPE Center of East Central Illinois.  The fundraiser will include an art auction, raffle and performances by Irish Music Circle, The Ex-Bombers, Jenna Jackley and Motherlode.

The Kiwanis Park offers free concerts at 7 p.m. every Tuesday.  The concerts are free and open to the pubic.

Irish Music Circle will perform at the free concert on Sept. 30.