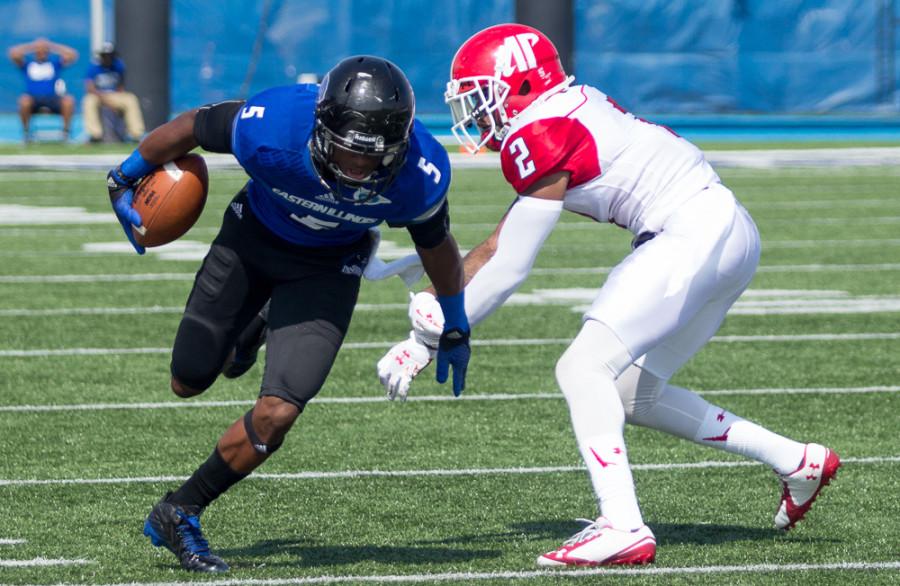 Red-shirt senior Joe Powell runs with the ball in the first half against Austin Peay at O'Brien Field. The Panthers lead 35-7 at halftime behind 266 rushing yards and four rushing touchdowns.

Jalen Whitlow rushed for two touchdowns and passed for another, leading the Eastern football team to a 35-7 halftime lead over Austin Peay at O’Brien Field.

The junior quarterback led the Panthers’ rushing attack with 117 yards on the ground on 13 carries.

Even without starting running back Shepard Little, Eastern rushed for 266 yards, as Jimmy Lera added 70 yards and a pair of touchdowns. While Whitlow dashed past the Governors on the ground, he also completed 11-of-13 of his pass attempts for 141 yards.

Red-shirt senior Taylor Duncan caught am 11-yard touchdown near the start of the second quarter to give Eastern a 14-0 lead.

The Panthers scored four touchdowns in the second quarter, with Lera tacking on a seven-yard and a 13-yard touchdown for the final two scores for Eastern.

Macius finished the half with 72 yards on 4-of-6 passing and led the Governors to their only scoring drive in the middle of the second quarter that was capped off by a Justin Roberson one-yard touchdown.

Sticking to what he said earlier in the week, Eastern coach Kim Dameron has stuck with Whitlow for the entire first half. The Panthers’ offense has 407 yards.

Austin Peay will receive the second-half kick off.