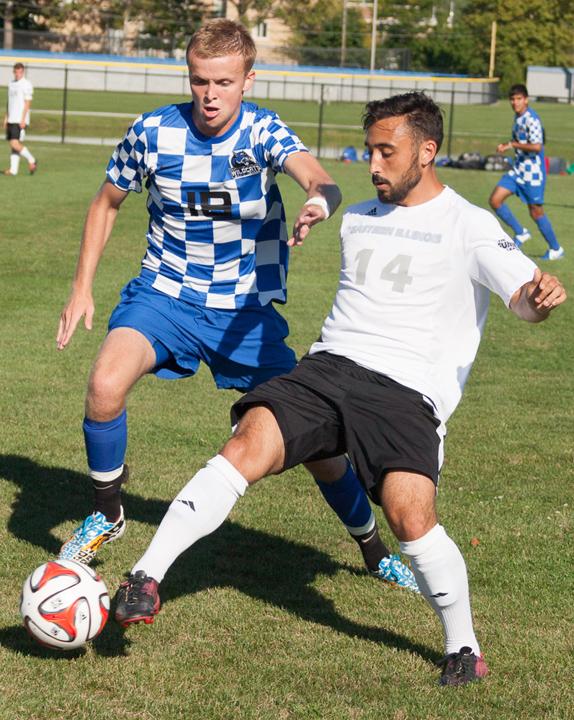 Senior Will Butler passes the ball up the pitch a match against Culver-Stockton on Sept. 8 at Lakeside Field. The Panthers beat the Wildcats 5-1.

The Eastern men’s soccer team is back on the road this weekend, starting at 6 p.m. Friday at Bowling Green and then plays against Cincinnati at 2 p.m. Sunday.

The Falcons are currently 5-1, following their 1-0 victory against Big Ten opponent Michigan on Tuesday in Ann Arbor, Mich.

During the span of its six games, Bowling Green has outscored its opponents 19-4.

Sophomore Pat Flynn leads Bowling Green and the nation in scoring with 10 goals and 21 points. Flynn has a couple of assists on the year, while three of his goals this year have been game winners.

The goalkeeper for Bowling Green is Nick Landsberger, who has started all six games this year. He has three shutouts on the season and a goal against average of 0.71. Backup goalie Ryan Heuton has had minimal time at goal, but has a scoreless 45 minutes of play.

Head coach Eric Nichols has used the same starting lineup for all six games this year. He lost 10 seniors from last year’s team that went 6-7-6 and finished fourth in the MAC conference.

“This will be a great test for us because there are a couple teams in our conference that play a lot like Bowling Green,” he said.

Eastern was 1-4-1 in the Summit League last season, with the Panthers’ lone win in conference play coming on Oct. 20, 2013, against Oral Roberts at Lakeside Field.

The Panthers are coming off a 2-1 loss at Western Michigan that dropped them to 2-3 this season.

Hansen said freshman Mike Novotny will start at goal on Friday night, but added that red-shirt sophomore Ben Feltes could go in and do the job if called upon. Novotny is 1-1 as a starter and has played in three games this season for the Panthers.

Hansen is using these non-conference games to prepare for the tough conference schedule ahead, he said.

“For conference teams it’s a different level of competition, more is on the line and teams know each other better,” he said. “Not allowing two goals in a game always keeps you in a game, but if we can get that down to a goal a game or less we are really going to put ourselves in a good position to be successful going into conference.”

Conference play begins on Sept. 27, when Eastern travels to Omaha.

The Panthers’ second leg of their weekend road trip is against Cincinnati, as the game is scheduled to begin at 2 p.m. Sunday in Cincinnati, Ohio.. Eastern leads the all-time series against the Bearcats 4-2, but both teams have not played each other since 1994.

Cincinnati picked up its first win of the season against IPFW, which is also in the Summit League. The Bearcats won 5-0 and improved to 1-3-2, snapping their three-game losing streak.