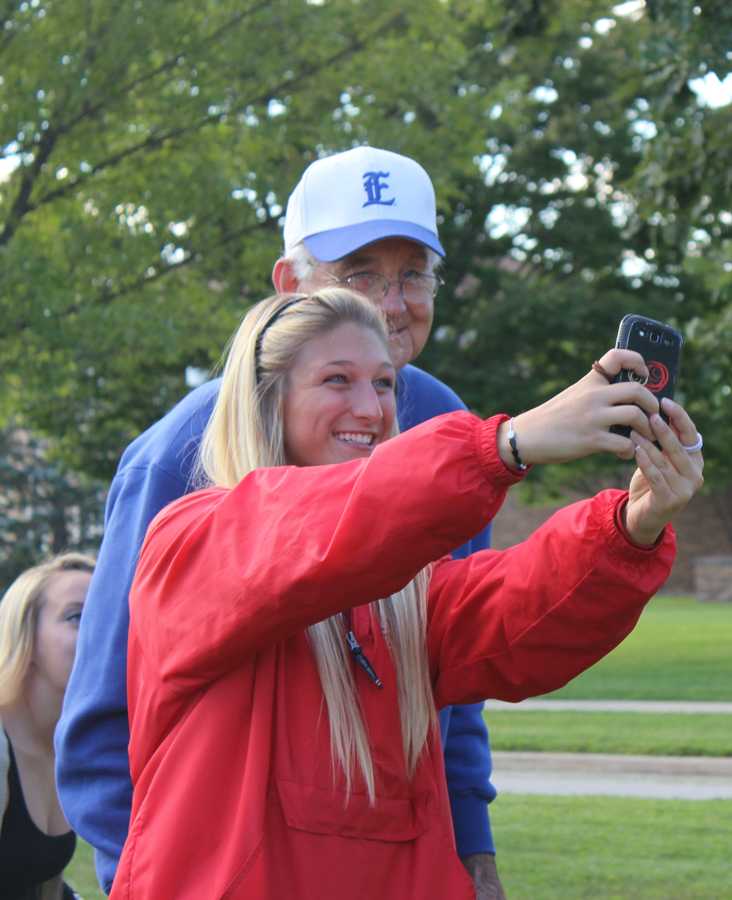 Catie Witt, a sophmore communications major, takes a selfie with President Bill Perry Tuesday during Prowlin with the Prez in Greek Court.

The weather could not have been nicer for an afternoon of beanbags, a balloon toss and pizza with President Bill Perry.

“Prowlin’ with the Prez” gives students the opportunity to meet with the president and ask questions they might have about happenings on campus or changes they would like to see implemented.

In the past, Pizza with the Prez has consisted of a sit down and talk with the president in a more formal manner.

Since last spring, the event has become more social than formal.

Perry said he likes getting together with students and hearing what is on their minds in different settings.

“I am interested in where they are from, what they are studying and how their semester is going,” he said.

Student Senate along with the Panhellenic and Interfraternity councils hosted the event.

Shimeen Ahmad, student vice president for academic affairs, said in the past it has always been more of a classroom setting in which students sat down to discuss campus issues.

She said now it has definitely turned into a social event that allows students to interact with the president.

“People can discuss things, but be comfortable, not like sitting in a classroom,” Ahmad said.

She said she hopes this gets people more excited for the three other “Prez” socials that the Student Senate has planned for the rest of the semester.

Many of the students who attended got a chance to speak with Perry.

Madeleine Sheley, a junior business management major, said she received advice from Perry on paths she could take with her degree and on how to make the most of her academic experience.

Perry also offered to connect her with alums that he knows in her field, Sheley said.

Christian Ruiz, a sophomore political science major, met Perry for the first time while playing beanbags with him.

“President Perry is definitely the kind of guy you can just hang out with and have a conversation with,” Ruiz said. “You would think just by meeting him for the first time that you were friends for quite a long time.”

Ashley Biro, president of the Panhellenic Council, said Prowlin’ with the Prez is a good way to bring the campus community together.

“I just think it is a great way for everyone to come together on campus—Greeks, non-Greeks, fraternities, sororities, Prez Perry, and student government,” Biro said. “I just like how everyone gets together and interacts.”