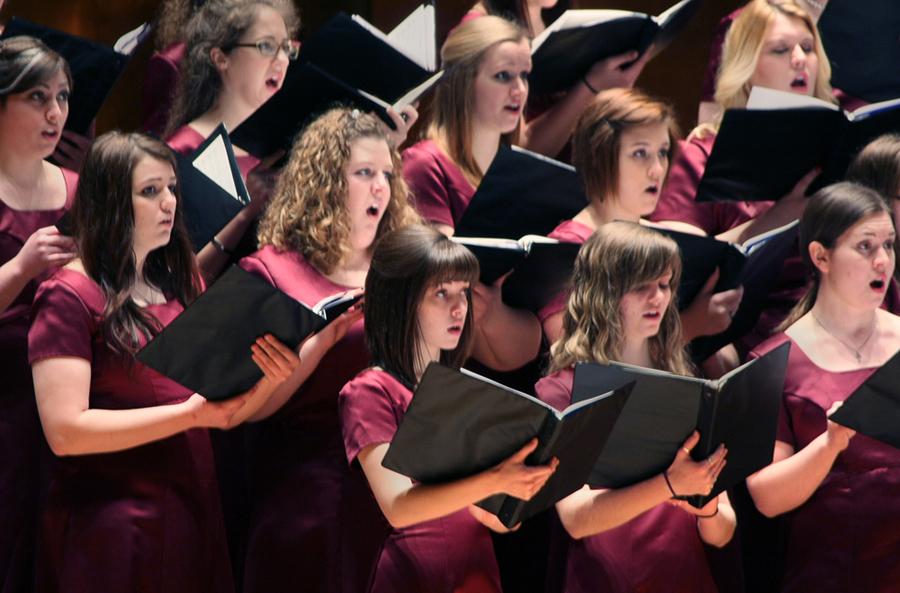 Eastern's choral ensembles sing "Set Me as a Seal," during the Eastern Symphony Orchestra's performance, "Songs of Love," Sunday in the Concert Hall of the Doudna Fine Arts Center. The concert was a compilation of love songs intended to celebrate the corpeal pleasures of love.

The Eastern music department will be hosting a variety of music ensembles at Doudna for their Collage Concert at 7:30 p.m. Friday in the Dvorak Concert Hall.

This will be the music department’s first concert of the 2014-15 season.

However, Ryan said, the groups have been doing their best to seem like one cohesive ensemble, and there are no completely solo parts.

“This piece and this concert, as a Collage of all our students’ efforts, is the sound of a unified group,” Ryan said. “While there are short moments of soloistic playing in the piece, all four members contribute equally to sound as one entity.”

The group has been practicing together for many long hours since the beginning of the school year.

“The percussion ensemble rehearses three days a week, and we have been rehearsing this piece during quite a few of those for the first three weeks of classes,” Ryan said.

The percussionists will perform a piece written for four marimbas, which are large, mellow-sounding keyboard percussion instruments, at the Collage Concert.

“The percussion ensemble will perform a piece by Graham Fitkin called ‘Hook,’” Ryan said.  “Fitkin draws the sound of the piece from early electronic dance music, and puts that aesthetic onto acoustic percussion instruments.”

The group will also be performing “Hook,” along with other pieces at their percussion ensemble concert at 4 p.m. Nov. 9 in the Dvorak Concert Hall.

The Collage Concert will feature many ensembles throughout the music department including the University Concert Choir.

The concert choir will be performing a piece titled, “Shakespearian Trilogy of Love,” which includes the songs “Sigh No More, Ladies,” “Take, O Take Those Lips Away” and “It Was a Lover and His Lass.”

This will be the world premiere performance of his work.

Tickets for the Collage Concert are $5 and can be purchased at the Doudna Box Office.