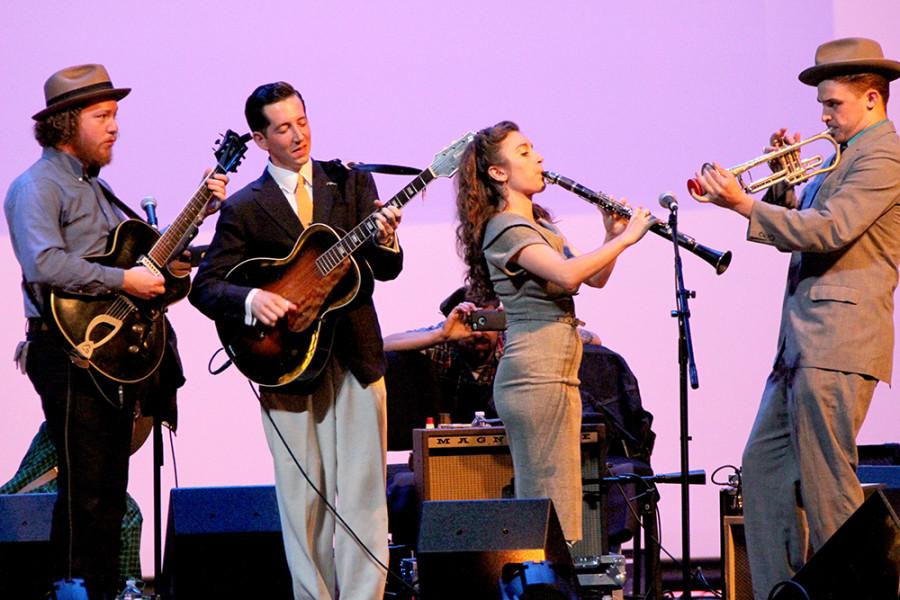 Pokey Lafarge performs with members of his band Monday during the Pokey Lafarge Central Time Tour in the Dvorak Concert Hall in the Doudna Fine Arts Center.

Doudna’s first venture into hosting multiple acts was a success, despite its long running time with no breaks. Throughout the show, the bands received good vibes from those in the audience.

A high-energy crowd cheered as Pokey LaFarge, the main act, introduced the tour.

“If we don’t see some dancers out tonight, you’re gonna hurt our feelings,” LaFarge said.

Many audience members did not dance, despite the request.

“If there’s people singing along and showing their love next to you, please let them do that,” LaFarge advised.

The show began with Emcee Dom Flemons started the music-festival-like show after having some difficulty properly strapping on his guitar with a performance of “Have I Stayed Too Long.”

Flemons continued to entertain the crowd before introducing the Loot Rock Gang, a country-rock quartet from St. Louis.

The Loot Rock Gang opened their set with “The Loot Rock Boogie,” while members of the tour danced behind the band and sang along.

The Gang featured an upright bass, baritone saxophone and a husband and wife singing pair.

The Loot Rock Gang performed a decent mix of original songs and covers were, although it would have been nice to hear more of their personal work from their new record they are promoting. Too many covers filled their set throughout the performance.

Flemons once again took the stage and performed a song entitled “Hot Chicken,” while strumming intricately on his guitar.

The Tillers, a bluegrass trio from Cincinatti, took the stage next to perform a handful of their songs including, “The Road Neverending,” “500 Miles” and “Unpainted Picture.”

The Tillers performed with a mix of different instruments such as the upright bass, acoustic guitar, banjo, fiddle and harmonica.

For their final song, members of the tour playing the trumpet, clarinet and baritone saxophone, joined The Tillers.

And impressive standing ovation was given in response to the ending of The Tillers’ set; however, many audience members left the concert hall at the conclusion of their performance and did not return.

Flemons, once again, took the stage while the instruments were reset and attempted to convince the audience to buy merchandise from the band.

Although buying merchandise is important, Flemons could have told the crowd a more appropriate argument, instead of the story he told about the musician’s starving children back home.

Cajun Country Revival, a quartet based out of Louisiana, brought arguably the most authentic performance to the stage while tour members two-stepped to their beats.

The band performed all their songs in French because of the importance of the Cajun music history.

Band member Jesse Lege brought the best musicality to the stage with his 47 years of experience and membership of the Louisiana Music Hall of Fame.

Despite their impressive performance, Cajun Country Revival played past their set time, putting the rest of the show roughly five minutes behind schedule.

LaFarge and his five-piece band took the stage at 9:35 p.m. and encouraged the audience to stand and dance along.

It only took two and a half hours for a few members of the audience to bob along to the beat of the music.

LaFarge performed fan-favorite tunes, “City Summer Blues,” and “What the Rain Will Bring,” that thematically transitioned through the seasons.

Audience members seemed to enjoy LaFarge’s witty humor and personality while he joked about the Chicago Cubs and the importance of staying hydrated with water and beer.

Despite the memorable performances from the various groups, the lack of an intermission or breaks between sets was jarring for some in the audience who started leaving after the second band, distracting from the show.

The festival-style of the show is a step in the right direction for Doudna. With a few tweaks and revises,  Eastern could become the future home to more unique musical endeavors.

Samantha Middendorf can be reached at [email protected]