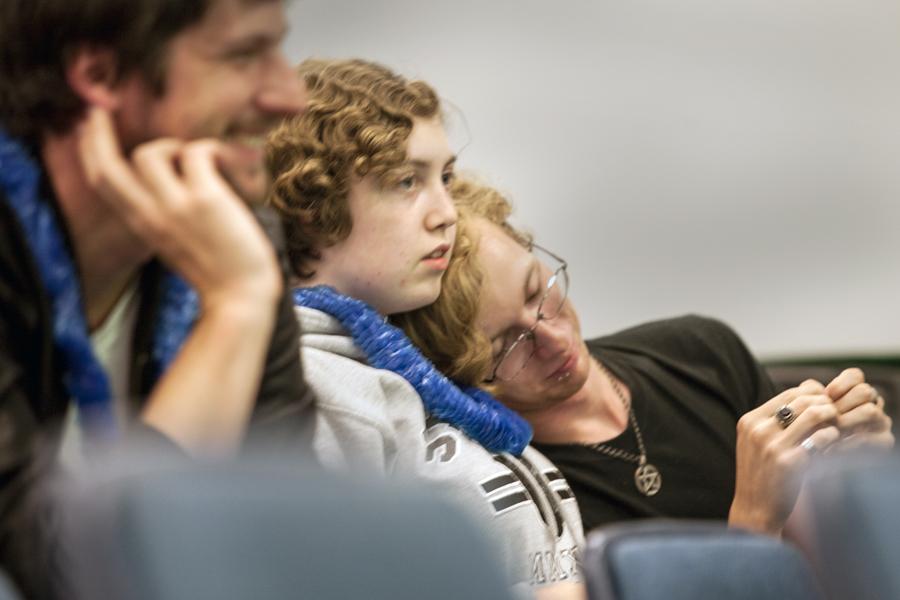 Destiny Rose, a freshman computer sciences and mathematics major leans on girlfriend's, Hannah Kelly, a freshman theater arts major, shoulder during a Pride meeting Monday in the Charleston/Mattoon Room of the Martin Luther King Jr. University Union. Kelly told the story of their relationship. The two have been together since they were 13.

Eastern’s Pride organization was granted office space in the multicultural building during the last school year, and with it the opportunity to utilize new ideas the group plans to execute this semester.

The lesbian, gay, bisexual, trans, queer and ally organization had been inquiring about a definitive resource center in years past, and last year’s opening has allowed the group to expand upon the services they offer to the community.

Pride’s president, Jason Haarmann, a senior mathematics major, said having a physical presence is an important element for the group.

“It provides a more static space versus Pride, where we only meet once a week for an hour,” Haarmann said.

Although members of Pride said they are relieved to have gained office space, their struggle now lies in finding the funds to supply the center with useful resources.

“Last year was really the start up year,” Haarmann said. “That’s why we’re just starting to utilize it, too – because it’s so new.”

Although Pride officers and advisory board members will be in and out of the center each day, Joanna Stauder, vice president of Pride, said she hopes the resource center can develop a larger staff in the future.

“I think that’ll help people feel more comfortable that if they need to talk to someone about something they can come talk to us directly rather than having to go through someone else,” Stauder, a sophomore biology major, said.

In the meantime, the group is working toward establishing new focus groups that will meet outside Pride’s scheduled weekly gatherings to further look over topics relevant to particular subgroups within the LGBTQA community.

“We’ve also just started a coming-out group, too,” Haarmann said. “So people who just started the process of coming out or just want a place to talk about their coming out experience can come and have a safe environment to do that in.”

Haarmann, who will lead the coming-out focus group, said his involvement in Pride gave him the courage to come out as a gay man.

“I really wanted a space to explore my identity because there really wasn’t a place to do that in Effingham, where I grew up. I wanted to figure out ways of coming out to my family,” he said. “It gave me a chance to solidify my identity since I hadn’t done that so strongly.”

Haarmann hopes that in his final year at Eastern, he can leave future students with resources, which may be as helpful to them as Pride was for him.

“A lot of schools actually have these focus groups,” he said. “We fought so hard for the space and now we want to think of ways we can utilize it.”