Eastern rushes for a season-high despite Little’s absence 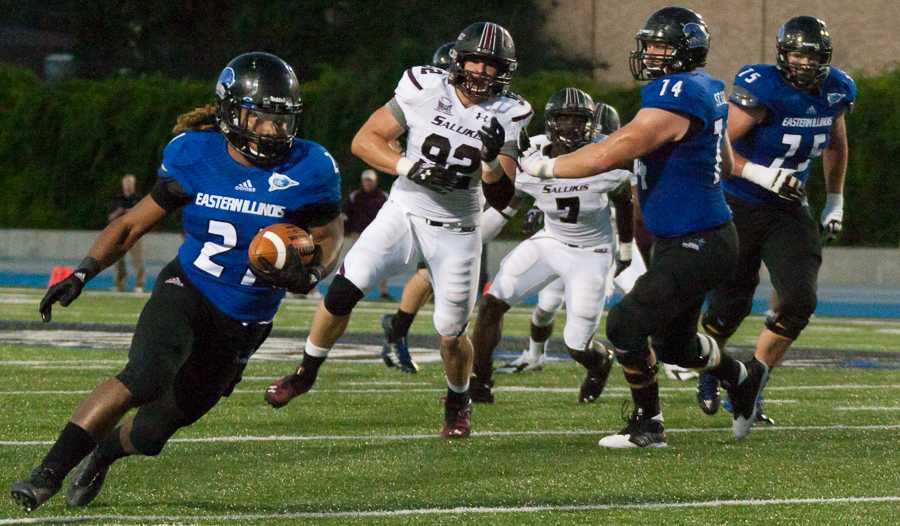 The Eastern football team rushed for a season-high 180 yards in its loss against Illinois State despite not having Shepard Little for most of the game.

After a three-yard gain on the Panthers’ fifth offensive play of the game, Little came off the ground and headed toward the sideline limping. The red-shirt junior running missed the next three Eastern drives before coming back with 8:44 left in the second quarter.

Little received back-to-back carries when he returned, gaining 12 total yards but came off the field again and did not return for the remainder of the game.

Panthers’ tight end Jeff LePak said the departure of Little was a blow to Eastern’s offense.

“Obviously that’s going to hurt us as a unit,” LePak said. “Shep is a big time player for us. There is a reason he was put on the Walter Payton Award watch list.”

Eastern head coach Kim Dameron said he wanted the Panthers to focus on their run game heading into Saturday’s game at Illinois State and specifically said he wanted to get Taylor Duncan more touches.

The Marshall native did get more touches, but it came only after Little went down with his injury. Duncan, who only had four carries entering the third game of the season, rushed for 87 yards on 14 attempts, both season highs for the red-shirt senior.

“I think Taylor and Jimmy did a good job handling the load,” LePak said.

The trio of Eastern running backs rushed for 132 yards, which was the first time the Panthers have eclipsed the 100-yard plateau from its running backs this season.

Little’s injury has not been disclosed.

Eastern will host Austin Peay at 1:30 p.m. Saturday at O’Brien to start Ohio Valley Conference play. The matchup features the only two teams that are winless heading into the conference schedule.

Austin Peay lost its second straight game to start the year, as the Governors lost 42-6 against Chattanooga on Saturday.

Chattanooga spoiled the debut of Governors Stadium in Clarksville, Tenn., as the No. 14 ranked Mocs scored in four straight possessions stretching from the end of the first half into the third quarter. Austin Peay dropped its 14th consecutive game after a 0-12 record last season.

The Governors are in their second year under head coach Kirby Cannon. After two games this season Austin Peay ranks last in the OVC in both offense and defense.

After allowing 42 points against the Mocs on Saturday, the Governors’ have now been outscored 105-6, following a 63-0 loss on Aug. 30, to Memphis.

Offensively, Austin Peay has averaged 163 yards per game this year. The Governors’ lone touchdown of the season came with 7:37 left in the first quarter, when quarterback Darrien Boone threw a 45-yard touchdown pass to Javier Booker on Saturday.

Boone, who is a true freshman, finished 15-of-20 for 124 yards. The running game continued to struggle, though.

The Governors carried the ball 36 times, but were only able to net 42 yards. The Governors are the only team in the OVC that has not scored a rushing touchdown this season.

Eastern Kentucky running back Dy’Shawn Mobley averaged 20.5 yards per carry, as the junior transfer rushed for 123 yards and a touchdown on six attempts.

Mobley, who transferred from Kentucky, led the Colonels to a 55-13 win over Morehead State in their home opener Saturday. Eastern Kentucky improved to 3-0 and remained the lone undefeated team in the Ohio Valley Conference.

Mobley took his first carry 61 yards for a touchdown and then set up the Colonels for another touchdown after a 54-yard run. The junior also caught two passes for 10 yards and was named OVC Offensive and Newcomer of the Week.

The Tigers’ defense put points on the board, as Saunders’ first interception in the first quarter ended with the Deland, Fla., native trotting into the end zone, returning the pick 45 yards for a touchdown.

Saunders added three tackles and had an additional pass breakup against Jackson State. He has three interceptions in the last two games for Tennessee State.

Southern Illinois-Carbondale defeated Southeast Missouri 50-23 on Saturday, but sophomore kicker Ryan McCrum made three field goals and two extra points for the Redhawks to earn OVC Specialist of the Week.

McCrum’s three field goals came from 38 yards and 43 yards, which established a new career-long for the sophomore.