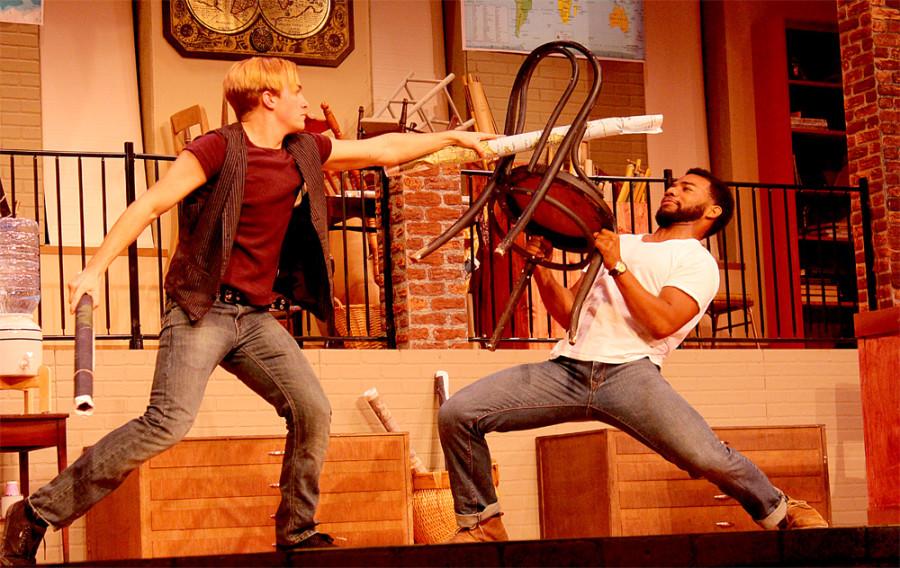 ng in minutes past the start time, Lonely Planet seemed to please the crowd.

The setting of Lonely Planet takes place in Jody’s Maps in 1993.

Carl, played by Jake Cole, a senior theater arts major, is the other main character who often occupies Jody’s Maps.

The play opens with Jody sitting in his shop.

Carl enters the scene, bouncing off the walls and describing to Jody one of the many jobs he has to report to today.

Jody explains to the audience that Carl is a good friend of his, saying that he has, “the energy of eight and the patience of none.”

Nevertheless, Jody and Carl appear to be inseparable friends.

The mood changes as Carl tells Jody that a friend of theirs has died.

Bobby is dead, the memorial is Thursday,” Carl said.  “Jody?  Don’t let us down.”

The audience soon finds out that Bobby was Carl’s best friend for 25 years.

The play continues, and more chairs pile up in Jody’s Maps.

The lights dim and are cast upon the stage once again as Jody and Carl begin to stage fights, using maps as swords.

The duo interprets fights based on scenes from “Star Wars” and Country Western movies.

The fight ends with a phone call, and Carl is once again called to one of his jobs.

Jody and Carl have an ongoing argument while trying to get Jody to leave the map store.

Jody admits to Carl that he has not been tested, and it becomes apparent that they are discussing the possibility of testing positive for HIV.

Although it is never said up front, one can assume that the chairs stacking up throughout the map store represent friends that Carl and Jody have lost.

“Sometimes I can barely remember the time that being sick meant you just had a cold,” Jody said.

Jody eventually leaves the shop and tests negative for HIV.

“You know what’s great about us,” Carl asks Jody.  “We never fell in love.”

The play comes to an end with Carl’s turquoise kitchen chair sitting in the middle of the map store.

“Will you keep my chair, Jody,” Carl asks.

Melissa Meiselman, a sophomore communications major, said she thinks the issue of HIV AIDS is a relevant topic among college students.

Tina Bonomo, a junior special education major, said she was not aware the play was about AIDS, but she was enjoying it.

“I think for the most part it’s pretty entertaining,” she said.

“The actors seem really into it.”

Lonely Planet will continue at 7:30 p.m. Thursday through Saturday and at 2 p.m. Sunday in the Theatre in Doudna Fine Arts Center.

Tickets range from $5-12 and can be purchased at the Doudna box office.