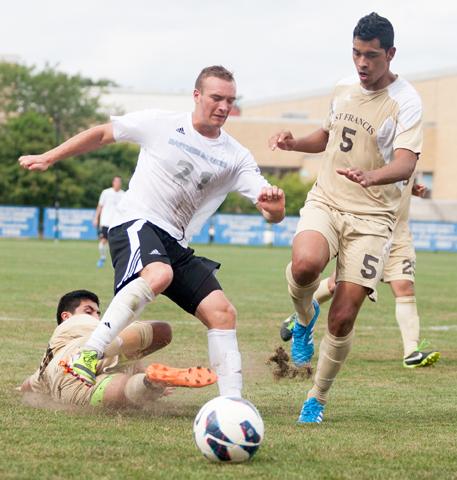 Sophomore Davis Wegmann avoids the slide tackle as he moves the ball towards the goal in a game against St. Francis on Aug. 30 at Lakeside Field. The Panthers beat the Fighting Saints 2-0. Wegmann had 3 shots during the game.

Coming off a blowout victory against Culver-Stockton Monday, the Eastern men’s soccer team heads to Western Michigan for a 2:30 p.m. game Sunday in Kalamazoo, Mich.

Western Michigan is currently 1-2-1 after beating DePaul 1-0 on the road Sunday.

Second-year head coach Chad Wiseman, who took Western Michigan to the MAC conference championship in his first season, leads the Broncos. His team is currently outshooting opponents 52-32 through four games.

Western Michigan is honoring their 1974 team on Sunday, which has Eastern coach Mark Hansen anticipating a large crowd.

“It’s their homecoming weekend so they’re going to have over 200 alumni alone besides just the student fans,” he said. “It should be a very high impact atmosphere and they fuel off of that.”

Hansen said Western Michigan as a very committed and hard working team. He also added that the Broncos’ coaching staff has done a tremendous job to this point.

Eastern will be taking the five-hour trip to Kalamazoo on Saturday after being off for five days. Hansen said he hopes the team used the time off to make the proper adjustments.

“The week off really allows us the ability to kind of address some issues that we’ve seen the last couple games,” he said. “Hopefully we can improve off the three or four days of hard training that we can get in before Sunday.”

Eastern’s last game against Culver-Stockton, Hansen said he was not pleased with the team’s first half play, despite the 5-1 victory.

“I think some guys weren’t as motivated as they should’ve been going into the game,” Hansen said. “It was more of a battle than it needed to be in the first half.”

The first-year coach said the biggest thing for Eastern moving forward is getting consistency out of the guys in everything they do whether it is the technical aspect of the game or individual things within a certain position.

Hansen wants to see the team play at the same level at all times.

“There are a lot of ups and downs right now within this team, so this week is about getting consistent performances out of everybody,” he said. “They are going to go at us for a full 90 minutes no matter what the score is.”

As of now Hansen is not naming the starting goalie for Eastern, but for Western Michigan the Broncos have junior goalkeeper Chase Rau in the net. He has started three of the four games this year, allowing two goals. He appeared in all 19 games last year.

Hansen made it clear that the goalie situation is not the only position that is open for the Panthers.

“Everybody is competing for their spot right now,” he said. “I think that’s what allows us to hopefully be successful in the end.”