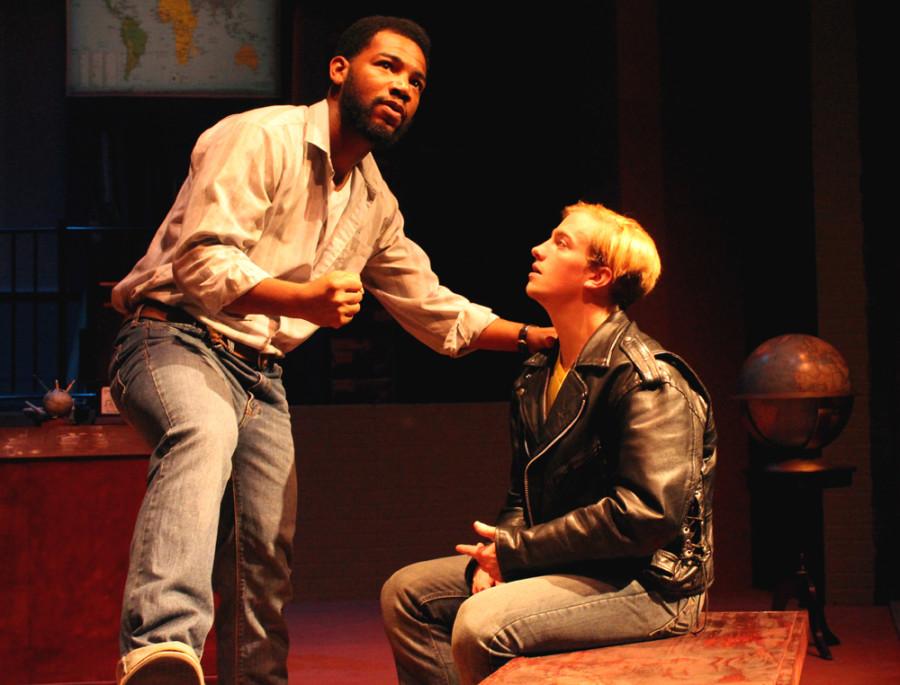 Blake Morris and Jacob Cole rehearse Tuesday at the Doudna Fine Arts Building, in The Theater, for the play "Lonely Planet." The play will debut Wednesday, September 10th.

The Theater will be host to the trials and tribulations of those fighting Acquired Immunodeficiency Syndrome to Eastern in the production of Lonely Planet starting at 7:30 p.m. Wednesday.

Kevin Doolen, director of the play, said the purpose behind the production of Lonely Planet is to spread the word of the relevance of AIDs amongst college students, because the fight against the disease hasn’t ended

“It’s because it isn’t over, that it is so relevant, but then also, we’re distance enough from the original outbreak to where now I think it’s time for us to learn the lessons that that was an opportunity for humanity to learn.”

However, the play is not simply about the fight against AIDs.

“The play is, I think, the most noble of all of them,” Doolen said.  “It’s really about friendship and compassion and tolerance and love – the things that make us human, that we need to remind ourselves of.”

Ultimately, Doolen said, he hopes those attending the play will walk away and view it as a learning experience.

“Just like any other kind of tribulation that humanity has faced, it’s an opportunity to for us as people to learn from it,” Doolen said.

Doolen also said college-aged students may think the disease doesn’t effect them, but it does.

“It’s people that feel invincible that forget that it is an issue,” he said.  “Yes, people think of it as a controllable illness, but the side effects of the medication and everything is horrible, it’s a horrible disease that has impacted the world. “

Among what Doolen hopes students will learn from the play is the history behind the disease.

“The first known case of AIDs was actually of a woman in Europe in the late 70s, and the majority of all cases around the globe are heterosexual,” he said.  There are so many misperceptions about the disease and those misperceptions are also about the people that disease effects.”

Doolen has dedicated the production of Lonely Planet to his longtime friend, roommate and Eastern alum John Hightower.

“John Hightower graduated in ’78 as a theater major and went on to U of I to do grad work and went on to work professionally in Chicago before we lost him” he said.  ‘It was a great loss of a very special, talented artist, originally from Effingham.”

Doolen hopes Lonely Planet will leave as great as an impact on the community as it did on him.

“The play allows me to come home and to do a piece of art, of real substance, and share it with my home and students and remind them that this is not just a disease that doesn’t impact them,“ Doolen said.