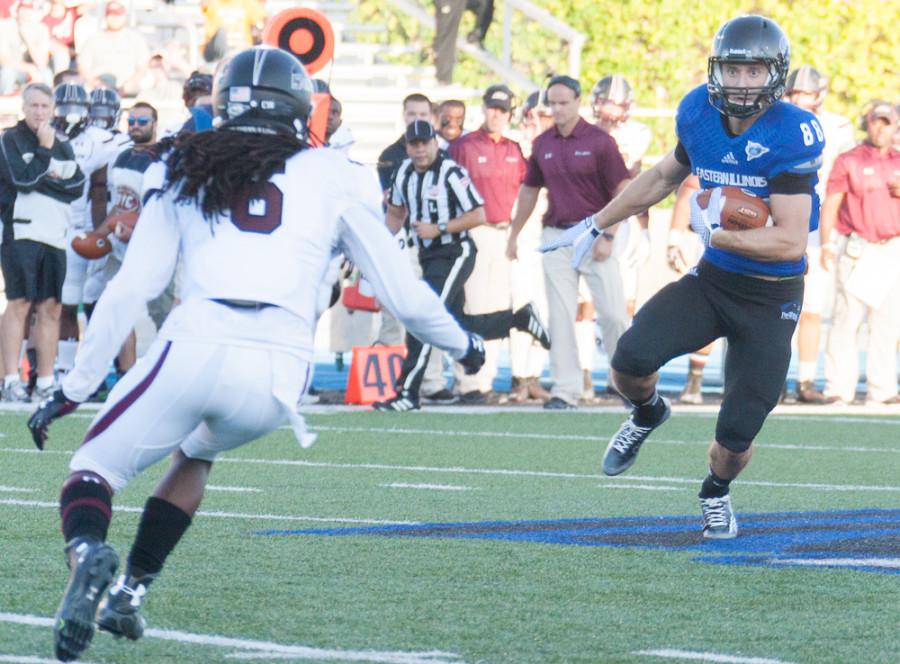 Red-shirt senior Adam Drake leads the Eastern football team in receptions with 20 through the first two games of the season, but head coach Kim Dameron is looking for more receivers to step up.

After debuting against Minnesota with 11 catches for 109 yards and a touchdown, Drake led the Panthers Saturday against Southern Illinois-Carbondale with nine catches for 139 yards.

In Eastern’s home opener against the Salukis, five other receivers combined to catch seven passes for 122 yards.

“Adam continues to make plays, but we need some guys to come along,” Dameron said.

South Florida transfer Stephen Bravo-Brown only caught two passes for 38 yards Saturday. That came after having six receptions for 66 yards against Minnesota.

Following Drake and his 20 receptions, Bravo-Brown is second on Eastern with eight catches on the season.

Little ranks third on the team with seven receptions.

“We have to do a better job of maybe spreading the ball around a little bit,” Dameron said.

The Panthers have been without junior wide receiver Keiondre Gober for their first two games of the season. At Minnesota, Gober was asked to go in but declined to do so, offensive coordinator Greg Stevens said. Then, Gober was suspended for disciplinary reasons going into Saturday’s game against the Salukis.

Dameron said Gober did not receive any playing time against Minnesota because red-shirt freshman Anthony Taylor had simply outplayed Gober heading into the start of the season.

“Anthony Taylor started and played the vast majority of the snaps in the game and that happened because of practice and those are the decisions coaches have to make on who gets the snaps,” Dameron said. “Anthony Taylor, we felt like gave us the best chance to win.”

Last season, Gober had 48 catches for 894 yards and scored nine touchdowns, which was third most for wide receivers behind Erik Lora (19) and Drake (13).

After two games this season, Eastern wide receivers only have two touchdowns. Taylor caught two passes for 30 yards against the Salukis that included a six-yard touchdown at the end of the first quarter. He only had one catch for four yards against the Golden Gophers.

Drake has Eastern’s other touchdown from a wide receiver, which came on the final play against Minnesota. Red-shirt senior quarterback Andrew Manley has the Panthers’ three touchdown passes, with his first going to running back Jimmy Lera.

A problem for the Panthers’ offense inability to consistently score has been turnovers. After three against Minnesota, the Panthers had two more turnovers against Southern. Manley threw two interceptions Saturday and said he has to improve going forward.

“I just need to make better decisions with the ball,” Manley said. “I had a couple of picks. One I tried to back shoulder, but I should’ve just thrown it away.”

Eastern has been shutout in five of eight quarters so far this season. In the second half in their home opener, the Panthers’ offense gained 112 yards and after going 7-for-10 on third downs in the first half they only converted 1-of-7 opportunities to end the game.

The Panthers have been outscored 80-41 in their first two losses.