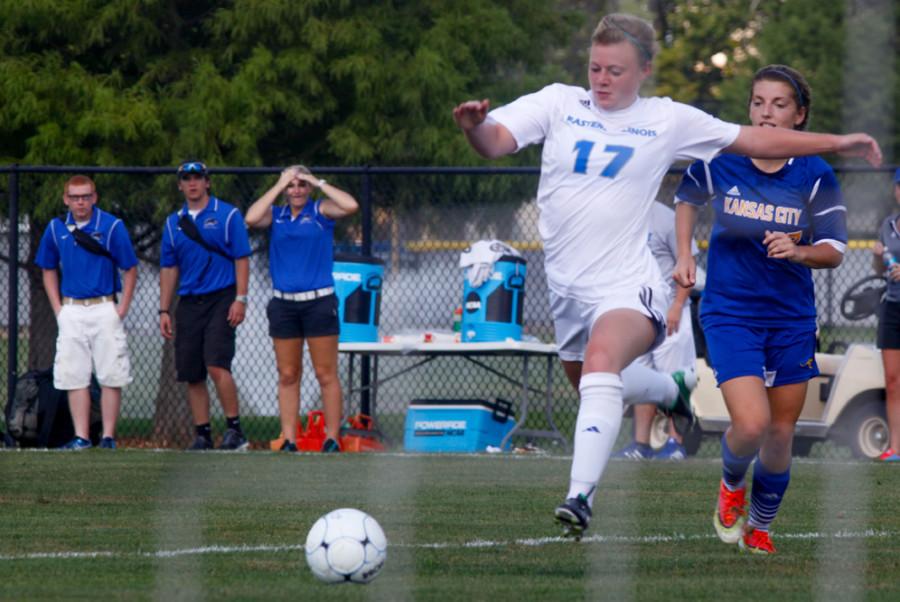 Dominic Baima | The Daily Eastern News Kathleen MacKinnon, a sophomore forward, attempts to shoot a goal Friday during the game against the University of Missouri – Kansas City. The Panthers lost the game 4-1.

IUPUI saw its 2-0 lead quickly dissolve in the second half of Sunday’s match against Eastern at Lakeside Field, but was able to find the back of the net one more time late to pick up the 3-2 win.

The Panthers were troubled with fouls for most of the match, but two fouls on IUPUI late in the second half were able to jumpstart an Eastern comeback that was stopped short by a third goal from IUPUI’s Krissy Kirkhoff.

After a scoreless first half, IUPUI got on the board twice with goals from Kirkhoff in the 48th and 57th minute for a 2-0 lead.

Eastern freshman Chloe Gottschalk found an opening in the defense and made a break for the goal, but was fouled inside the box, setting up a penalty kick in the 78th minute.

With the score 2-1, Eastern jumped back on the offensive and Radloff sent a ball through the middle to this year’s leading scorer, red-shirt junior Chris Reed. This time it was Reed who was fouled and it was Reed who scored on the ensuing penalty kick.

IUPUI was able to spark a comeback of its own, with Kirkhoff scoring the go-ahead goal in the 82nd minute, just two minutes after Reed’s penalty kick.

For the second straight match, Eastern started red-shirt sophomore Kylie Morgan in goal. She made four saves in the match.

Red-shirt senior Lauren Hoppensteadt left the match early in the first half with a left ankle injury and was unable to return. She left the match on crutches. Eastern head coach Jason Cherry said he did not know Hoppensteadt’s status at the end of the match.

What Cherry did know was that the Eastern women’s soccer team needs to limit its mistakes throughout the match.

“We gotta stop making so many mistakes,” he said. “The problem is, we make mistakes, we don’t execute, and then they counter on our mistakes and they just killed us. We’re shooting ourselves in the foot.”

The Panthers return to action against Wisconsin-Green Bay at 1 p.m. Sept. 14 at Lakeside Field.

The Eastern women’s soccer team again found itself ahead 1-0, again off a goal from Reed off an assist from Radloff. But againthe Panthers lost the lead in the second half, falling 4-1 to Missouri-Kansas City on Friday at Lakeside Field. So Cherry and the Panthers, it’s back to the drawing board.

“I just have to go back home and think about what can I do make this team better,” Cherry said. “I care a lot about them and I want them to succeed. Just gonna have to go back to the chalkboard and see what I can do to get the best out of them.”

The Panthers got on the board in the 23rd minute when Radloff’s shot deflected off the crossbar and Reed was there to head it in for the 1-0 lead.

“Just another followed shot,” Reed said. “Got something good going on with Meagan, I guess.”

The goal is Reed’s second of the season, as well as Radloff’s second assist. Radloff had a team-high three shots on goal against the Kangaroos.

Missouri-Kansas City responded in the 28th minute with a goal from Sarah Todd off a free kick that got past Morgan. Friday was Morgan’s first start of the season.

After heading into halftime tied 1-1, Missouri-Kansas City scored three times in the second half to secure the win.

Missouri-Kansas City’s Alyssa Elver scored in the 51st minute on an assist from Ellie Chadick. Chadick scored a goal of her own shortly after, getting the assist from Olivia Hodison in the 55th minute.

The Kangaroo’s fourth goal came from Kara Priest in the 63rd minute.

Cherry said he was impressed with the way Morgan played, despite the loss.

“I thought she did fantastic,” he said. “I think she played well enough to win the game, we just let her down as a whole, as a team today.”

Freshman Gabby McLaurin suffered a right ankle injury during the pre-match warm ups, Cherry said. Her status will be reevaluated next week.