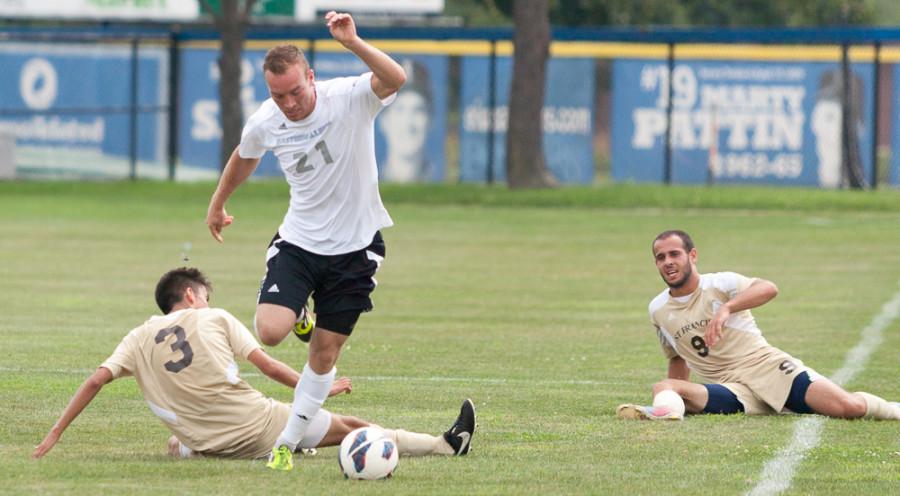 Jason Howell | The Daily Eastern News Senior Davis Wegmann avoids slide tackles by two St. Francis in a game on Aug. 30 at Lakeside Field. The Panthers beat the Fighting Saints 2-0. Wegmann had 3 shots during the game.

The Eastern men’s soccer team fell to 1-2 on the season following a 2-0 loss to Central Arkansas Friday night in Conway, Ark. Eastern had more shots on goal but was not able to capitalize on its chances.

This was the first time this season where Eastern was unable to score a goal. Eastern had nine shots on goal, three by captain Jake Brillhart, but could not get one past Central Arkansas goalkeeper Harrison Veith. Veith saved all nine of the shots he faced.

Brillhart is confident that the team could stay motivated after this loss.

“We’re out-playing everyone and we know it.” He said. “The results will come.”

15 minutes into the match, Wes Carson scored his second goal of the year for Central Arkansas. He had three shots on goal. In the 34th minute Pepe San Roman added the second goal that came off a deflection in the box.

Central Arkansas only had four shots on goal but took advantage of their opportunities. Ben Feltes had two saves for Eastern.

It was an eight-hour bus ride to Central Arkansas and the team got there late the night before the match. Waiting around all day for the match to come is also what Hansen called a learning experience.

Eastern’s Tony Meza and Jack Patrick, who did not play against Lipscomb because of injuries, also did not play Friday night. Hansen said they were both able to play, but they were just not used.

Hansen said they did much better than they did against Lipscomb when responding after being scored on. He said he was happy with the fight his team has shown in losing efforts.

“At this point I’m pleased with the battle we’ve shown,” he said.

Next up on the schedule for Eastern is Culver-Stockton, who is currently 1-1 after getting shutout 3-0 against William Woods on Sept. 2nd. This is the first time Culver-Stockton is going on the road this year after failing to win any away games last year.

Culver-Stockton started sophomore goalkeeper Jason Ebbing in its last match. Ebbing has given up three goals in two games this season. Culver-Stockton also returns junior Dominic Caruso, the leading goal scorer from last year. He has yet to score so far this season.