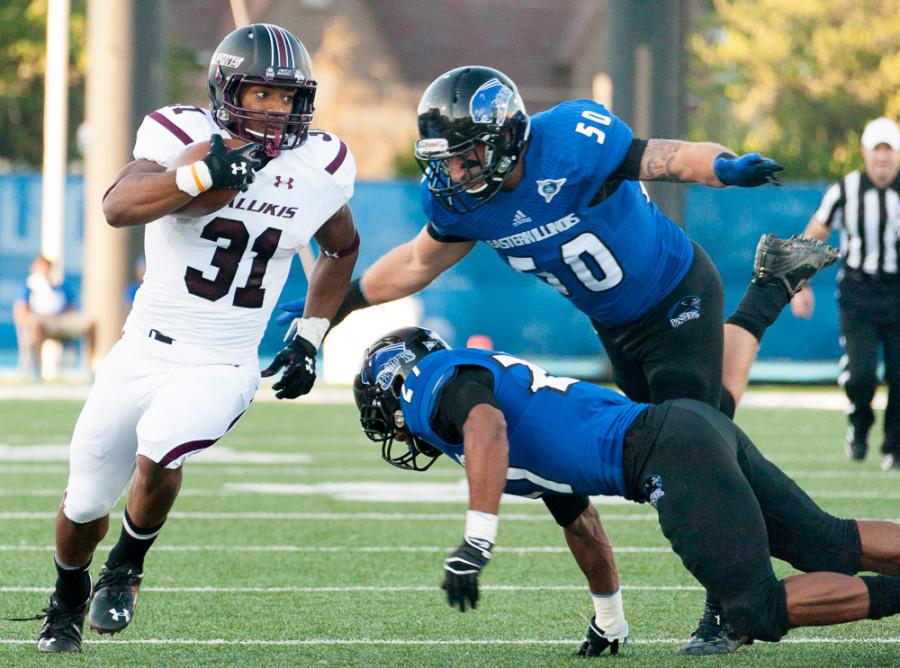 In the first half, Southern Illinois-Carbondale got out to a 14-7 lead, but the Panthers’ offense drove down the field scoring on two long drives to take a 21-14 halftime lead.

The game changed in the third quarter, when the Salukis outscored the Panthers 17-0.

Eastern head coach Kim Dameron said it was as simple as adjustments.

“They obviously made better adjustments than we did at halftime,” he said. “We just have to play smarter and do a better job and that starts with me.”

Senior running back Malcolm Agnew rushed for 147 yards and three touchdowns for the Salukis. His first two touchdowns came in the first half, when he rushed for 84 yards on 11 carries.

Dameron was disappointed with the Eastern defense and its inability to tackle Agnew and Southern’s All-American tight end MyCole Pruitt.

“I know why we tackled poorly, we tackled poorly because our target was too high,” Dameron said. “We started all of a sudden thinking we had to tackle (Pruitt) and the running back Agnew up high and that’s right in their wheel house.”

Agnew finished the night averaging 8.2 yards per carry. Meanwhile, Pruitt caught seven passes for 61 yards. In the second half Pruitt had catches of 18, 16 and three yards.

Dameron said he was on his defense all of the first half to tackle better. The talk continued into halftime.

“We talked to them at halftime and during the first half and we made it a point to lower your target – you’ve got to tackle these guys down low,” Dameron said. “For whatever reason we just didn’t do a good job of that.”

Red-shirt senior Andrew Manley was in for Eastern’s first drive of the third quarter after giving the Panthers their only lead of the game at the end of the second quarter with a seven-yard touchdown run.

“We shot ourselves in the foot with penalties,” Dameron said. “You can’t have 11 penalties. Not against a good football team.”

Eastern was penalized for 84 yards on its 11 penalties.

The lack of offense in the third quarter allowed Southern to score 10 points, following its opening drive that was capped off by a 19-yard touchdown catch by LaSteven McKinney.

Agnew added his third touchdown run with 5:44 left in the third quarter as well.

Defensive back Anthony Standifer made five tackles for the Panthers, while also intercepting Southern quarterback Mark Iannotti in the first quarter.

Standifer, who transferred from Ole Miss, said Eastern has to do a better job at getting as many bodies to the ball carrier as possible.

“I think we just have to wrap up and have everybody swarm to the ball,” Standifer said. “We had a play where we thought (Agnew) was down and he scored, but if we would have had everybody at the ball that he wouldn’t have scored.”

That run by Agnew came with six minutes left in the first half. He took the hand off from Iannotti and after running over a couple of tacklers Agnew kept running, as the Panthers’ defense stood around thinking he had been down. The 32-yard touchdown gave Southern a 14-7 lead.

For Dameron and the rest of his coaching staff it’s back to the drawing board, as Eastern begins to prepare for another in-state rival Saturday, when the Panthers play at Illinois State.

“We’re going to have to see the film and see where it is that we had our errors and see if we have to make some personnel changes, or changes in what we’re doing or how we’re doing it,” Dameron said.

Despite the 0-2 start for Eastern, Manley said the losses are being used to drive the Panthers as the season continues.

“I feel like if anything this loss is going to help us out and motivate us moving forward,” Manley said. “We have to come together as a team and make sure our goals are intact, which they are.”

And those goals remain high for Eastern, which reached the quarterfinals in the FCS playoffs last year.

“We still have our goals to accomplish, which are to win the OVC and the national championship,” Standifer said. “Everyone is still motivated. The season’s not over – we have a long ways to go.”