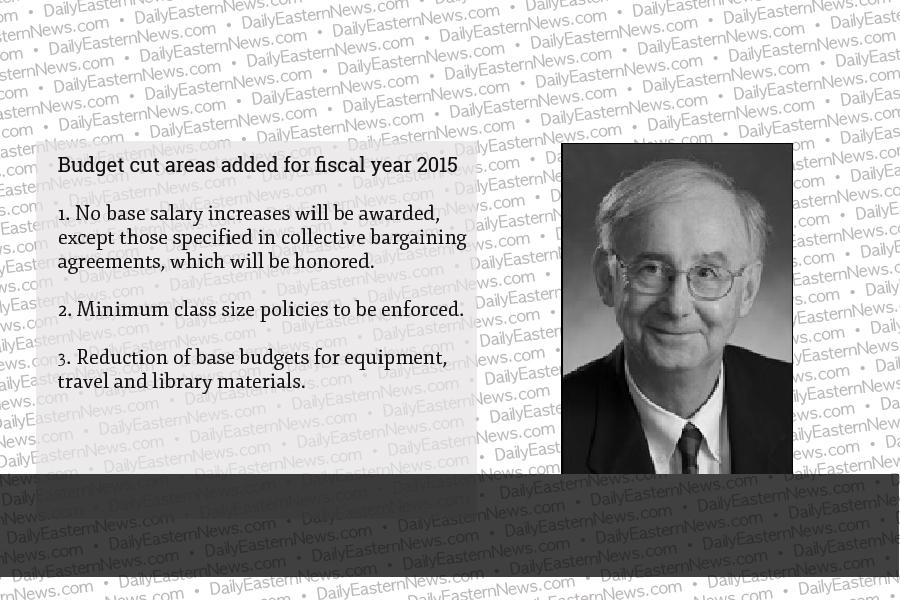 President Bill Perry released an email Friday detailing three additional areas that will be acted on to alleviate the $7 million budget cut, as well as saying no to more personnel reductions.

The combined results of the new actions being taken, plus the recommendations from the Council on Planning and Budget would cut $8.5 million for the fiscal year, according to the email.

The email listed a salary freeze — “except those specified in collective bargaining agreements, which we will honor,” a reduction in library materials, travel and equipment and an enforcement of minimum class sizes as areas to help the budget.

In the email, Perry also commented on personnel reductions.

Perry said on Sunday that the amount of personnel reductions were fewer than five, and did not affect faculty. He added that positions will become vacant as semesters change and faculty leave, which happens every year.

As for the reduction in library materials, equipment and travel, Perry said the overall goal was the important objective.

While attrition did help alleviate the budget, Perry said in the email the hiring freeze could result in positions not being filled.

Despite using funds and reserves to help with the budget, Perry said in the email that low enrollment is forcing the budget to minimize for the next two fiscal years.

Perry said the funds and reserves came from the New Science Building Capital, which amounted to $8 million.

Perry added the reserves would help the university for the next two fiscal years, and said the board of trustees approved it in June.

The email also recapped the previous recommendations by the CUPB, which were presented to Perry and the board of trustees at the end of last semester.

The CUBP recommended instituting a hiring freeze for the next two fiscal years, along with investing selectively in programs that produce “sustainable, quality enrollment increases” and a reduction in personnel and operational expenses.

Along with those recommendations, the CUPB also suggested reducing information technology costs and structure with a goal to reduce expenditures by $500,000.

Finally, the CUPB recommended last semester that there be a reduction in staff to faculty ratio over time and an increase in online offerings.