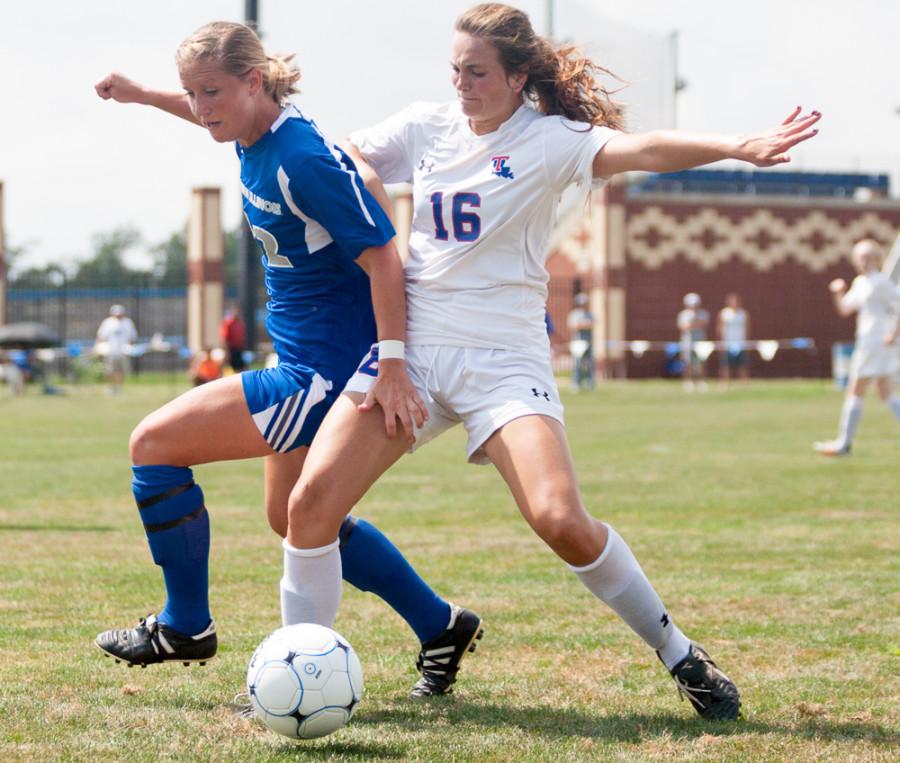 Red-shirt junior forward Chris Reed battles against defender Haley Laque in a game on Sunday at Lakeside Field. The Panthers lost to the Louisiana Tech Bulldogs 3-1. The Panthers are 0-4 overall. Reed was the lone goal scorer for the Panthers.

Eastern women’s soccer head coach Jason Cherry is not sure just yet who will be in goal this weekend, when the Panthers take on Missouri-Kansas City at 3 p.m. Friday and IUPUI at 1 p.m. Sunday at Lakeside Field.

Junior Emily Hinton got the nod in the Panthers’ first four non-conference matches of the season, but Cherry said he would like to see backup Kylie Morgan get some time as well. Whether or not that will be this weekend remains to be seen.

“We’re going to evaluate this week,” he said. “Having only two goalkeepers, I want to get our No. 2 some time as well.”

Morgan, a red-shirt sophomore, has not played since Sept. 20, 2013, against Drake. She has appeared in just five games since transferring to Eastern from Kentucky last year and sat out most of 2013 with a hand injury.

Neither Morgan nor Hinton has a win under their belt in goal for the Panthers. The only goalkeeper on the Panthers’ roster with a win, junior Cortney Jerzy, is out for the season after suffering another concussion in the spring.

Friday will mark the second all-time meeting between Eastern and Missouri-Kansas City. The first meeting, on Sept. 12, 2010, ended in a 1-0 loss for the Panthers at Lakeside Field. The Panthers last played IUPUI on Sept. 2, 2011, and played to a 2-2 draw in Indianapolis, Ind.

Meagan Radloff started that match as a freshman and Lauren Hoppensteadt, then a sophomore, had one of the Panthers’ two second-half goals to come back from a 2-0 first-half deficit.

Radloff, now in her senior season, and Hoppensteadt, a red-shirt senior, are now the team captains, and join Madison Carter and Allie Lakie as the only players from the 2011 season still on the roster.

“I’m feeling pretty good,” Radloff said. “I think the team is pretty excited after our last game went. I know we’ve played them a couple times and they’re usually a good team to play.”

The Panthers recorded their first goal of the season last Sunday against Louisiana Tech on a Radloff-assisted goal from red-shirt junior Chris Reed. Eastern is 0-4 to start the year, but Radloff said she has seen the team’s progression move forward match-by-match.

“Even though we haven’t won one, you can still see that we had a goal at least, so that’s an improvement,” she said.

Missouri-Kansas City enters the weekend at 1-2-1, coming off a 2-0 loss to Tulsa. The team is led by freshman Kara Priest, who has scored both of the Roos’ two goals this season. Junior Nina Tzianos has started all four matches in goal for Missouri-Kansas City.

IUPUI is 1-3-1, coming off two straight losses to Illinois-Chicago and Xavier. Their only win came when the Jaguars beat Southern Illinois-Edwardsville 2-1 in Indianapolis last Friday.

The Jaguars, who have yet to win on the road this year, have scored three goals this season, all by different players. IUPUI has also used two different goalkeepers in its first five matches of the season.

Cherry said he is familiar with both teams from his days as an assistant at Western Illinois, where he competed against both teams in Summit League-play. Missouri-Kansas City, however, now competes in the WAC.

“I actually know both coaches very well,” he said. “They’re both very similar to us in the style of play and what they try to achieve going forward and defensively. I think it’s going to be a really competitive match, both games this weekend.”