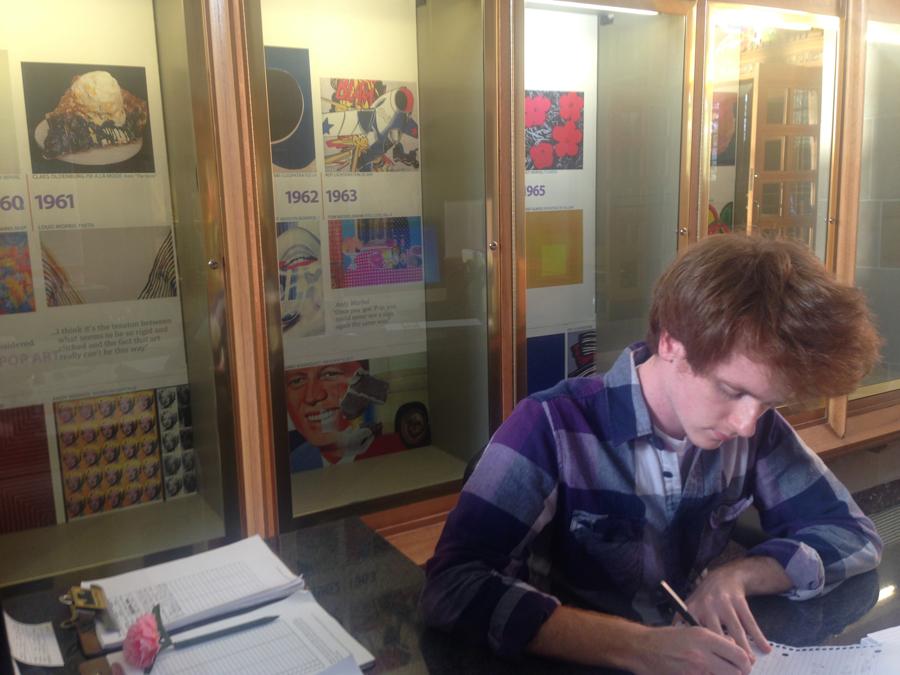 Matthew Reid, a senior math major, works on math homework in front of one of the many 60's displays in Booth Library. These displays, scattered across the library, will be part of a semester-long exhibit called "Revolutionary Decade: Reflections on the 1960s."

Students, faculty, staff and the city of Charleston will be able time warp to the 1960s while visiting “Revolutionary Decade: Reflections on the 1960s,” this semester’s Booth Library exhibit.

From Sept. 9 until Nov. 20, Booth Library will be host to everything 60s related.

David Bell, faculty member of reference services at Booth, said the 1960s was chosen for the exhibit due to the 50th anniversary of the decade as well as its significant events and inventions.

Bell said many of the things we take for granted today were set in motion during this decade.

“The Internet, the birth control pill, human rights movements, the U.S. moon landing, lasers, revolutions in popular music and art, color television, the Vietnam War, and so many more things happened in the 1960s that shape who we have become as Americans,” Bell said.

Booth intends for the exhibit to showcase to the public what an impact the 1960s has had on the country.

“The exhibits throughout the building are designed to inform the viewer, often in an entertaining way, about all of the remarkable events, achievements, tragedies, and triumphs of the decade of the 1960s,” Bell said. “In addition to exhibits, we have more than twenty events scheduled.”

Among those programs are a series of lectures, fashion shows, student research panels, musical performances, panel discussions and film and T.V. screenings.

The series will begin with an opening program and reception at 7 p.m. Sept. 9 in Booth’s West Reading Room.

The keynote address, “No Problem of Human Destiny is Beyond Human Beings: John F. Kennedy and the Sprit of the 1960s,” given by Edmund Wehrle, professor of history, will begin at 7:30 p.m.

All programs are free and open to the public.

Bell added the planning of the exhibit began roughly two years ago in the fall of 2012.

“Booth Library’s programming committee initially came up with the idea,” he said.

Bell said the time and dedication it has taken to plan the exhibit over the past two years will directly reflect the success Booth hopes to have.

“Many people have put a great deal of time and effort into putting this exhibition together, and I think it shows in the high quality of the final product,” he said.

Allen Lanham, dean of library services, said the exhibits represents Booth’s ongoing mission with their exhibits to spark the community to think collectively on one topic, or in this case, time period.

“We hope to provide an in-depth look at the major issues and accomplishments of that time not only as a lesson in history, but in order to reflect on how these events still affect us today,” Lanhem said.