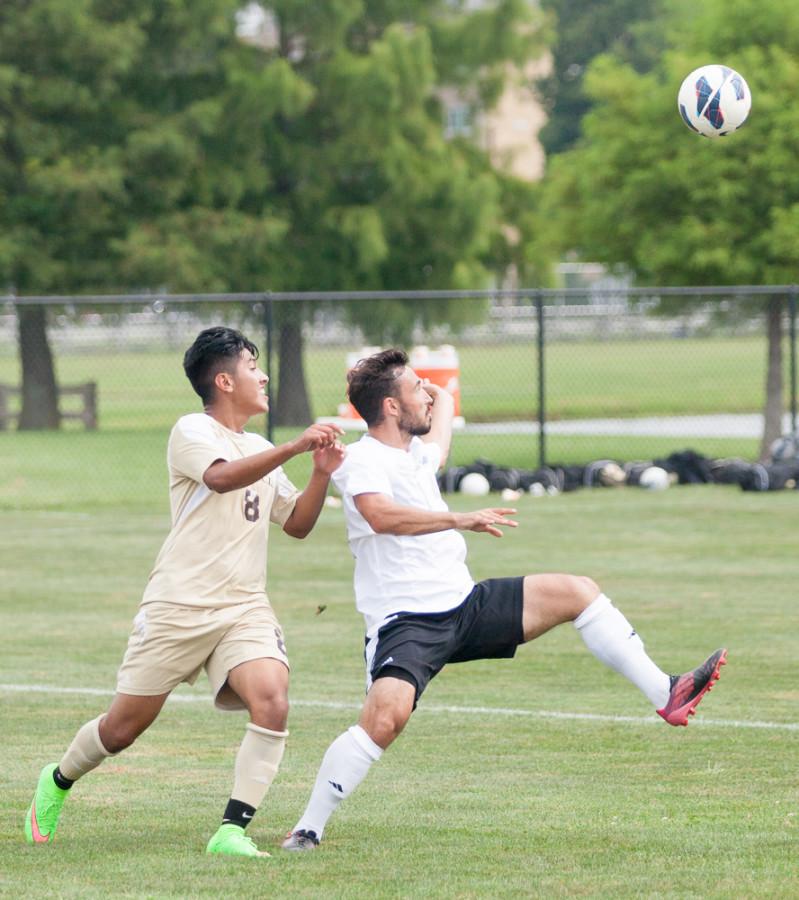 Senior midfielder Will Butler attempts to keep possession of the ball in a game on Aug. 30 at Lakeside Field. The Panthers beat St. Francis 2-0. Butler scored the first goal in the game.

After winning and losing a game at home during the Labor Day weekend, the Eastern men’s soccer team goes on the road for the first time under head coach Mark Hansen.

The Panthers will be welcomed by Central Arkansas, which despite going 4-11-2 last year had a winning record at home.

Central Arkansas finished with a losing record last season, but the Bears played in several close games. They played in seven overtime games, as the Bears relied on a freshmen and transfer heavy roster in 2013.

Now, Central Arkansas returns the majority of its players from last year that now have a full season of experience.

Central Arkansas started a true freshman Harrison Veith in its last game against Incarnate Word on Sunday at home. Veith made two saves and gave up just one goal on 10 total shots in a 2-1 Bears’ win.

The Bears are returning sophomore Wes Carson, who made the Missouri Valley Conference All-Freshman team last year. Carson scored a team-high seven goals last year and has one goal this season. That goal came in the 25th minute of the first half against Incarnate Word.

Despite being projected to finish last in the Missouri Valley this year, Central Arkansas still had two players named to the pre-season all-American team. Seniors Logan Miller and Ryan Taphorn were able to take two of the 12 available spots on the all-American team.

Eastern was winless on the road last year, but coach Hansen likes how his team has performed to this point especially against a good Lipscomb team on Monday.

“I think we gave them everything they could handle and then some,” Hansen said.

The Panthers went down 2-0 after 19 minutes of play, but scored a goal late in the opening half. Eastern also had more shots on goal than Lipscomb 8-5.

The Panthers were outscored by 21 goals in 11 games away from Lakeside Field. They managed one tie away from home, as they tied 4-4 against Green Bay.

Hansen is not preparing any differently than he would for other opponents and is trying to get the Panthers focused for their Ohio Valley Conference schedule.

“We want to make sure we’re worried about ourselves as we prepare for conference,” Hansen said.

Eastern lost the last meeting between these two teams in 2012 in double-overtime 2-1.