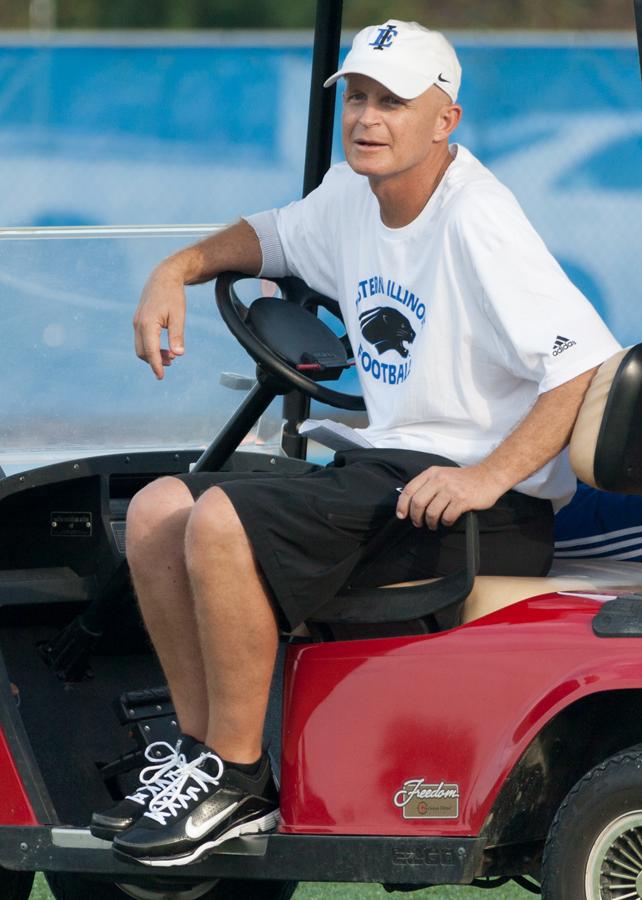 Coming to Eastern was a no-brainer for offensive coordinator Greg Stevens.

The moment Eastern’s first-year head coach Kim Dameron reached out to Stevens, he immediately knew he would follow his long-time friend to Charleston.

The Dameron-Stevens duo was years in the making, beginning with their coaching stop at Stephen F. Austin more than a decade ago.

“We had an admiration for each other once we got to know each other,” Stevens said.

The same could be said for both of their families.

Creating such a close relationship off the field was inevitable, Dameron said, because he and Stevens worked so closely on the field.

But in 2005, Stevens and Dameron departed from Stephen F. Austin to pursue positions at Utah State and Louisiana-Monroe, respectively.

Though the two were apart, they remained in contact throughout the years.

They saw each other from time-to-time at coaching conferences and talked to each other on the phone every few months.

“It’s kind of like brothers,” Dameron said. “You don’t have to talk all the time to keep that commonality, that bond.”

In the meantime, Stevens had a two-year stint at the Division II school Delta State before becoming the offensive coordinator at another FCS school in Southeastern Louisiana in 2012.

Dameron had stops at Mississippi, Cornell and Louisiana Tech.

Stevens and Amy, Dameron and Debbie, and Scott Reed, the quarterbacks’ coach at Stephen F. Austin in the early 2000s, and his wife all accompanied each other one a five-day trip to New Orleans.

“We ate a lot of food,” Stevens recalled. “That’s what you do in New Orleans.”

The 2013 season began and finished. Dameron’s Louisiana Tech defense ranked in the top half of the Conference-USA.

In 2013 Stevens’ Southeastern Louisiana offense ranked 10th in the country, averaging 483.3 yards per game, 12th in scoring with 38.4 points per game and advanced to the FCS quarterfinals.

“There are very few coaches who can do what he does,” Dameron said.

This year, Southeastern Louisiana finds itself ranked No. 3 in the FCS Sports Network poll. Eastern is ranked No. 16.

“That was the toughest thing to leave,” Stevens said. “I knew how good they were going to be this year, especially with Bryan coming back.”

But Stevens could not say no when received a call from Dameron, asking him if he would join the staff at Eastern.

“‘If I take this job, are you interested in going,'” Dameron said to Stevens, “And he said ‘yes, I’m very interested.'”

Stevens left a great situation at Southeastern Louisiana in pursuit of another one at Eastern.

Stevens saw Eastern as equally appealing, if not more, whether it was being able to coach at the side of his long-time friend, financially or talent-wise.

He was inheriting an offense that was No. 1 in the nation a year prior with a significant amount of its core players intact, including Shepard Little, Adam Drake, Jeff Lepak and Collin Seibert earning preseason All-Ohio Valley Conference honors.

Stevens’ offense, a pro-style offense that can speed up or slow down on command, favors the run. With Little returning, Eastern’s leading rusher a year ago and one of 20 players on the 2014 Walter Payton Award Watch List, makes Stevens an ideal coordinator in Dameron’s eyes.

“I’ve defended a lot of people, and because of that I knew his offense was the kind of offense I wanted to run,” Dameron said. “It just so happens that one of my best friends knows how to do it.”