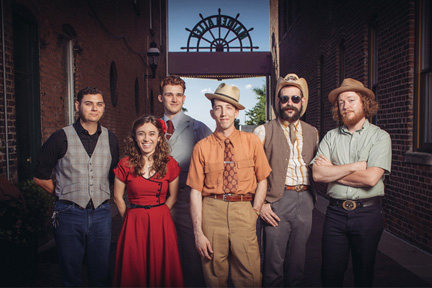 Pokey Large, an American roots artist, will be performing 7 p.m. Sept. 15 in the Doudna Fine Arts Center. Doudna also presented Eastern and the Charleston communities with a Pokey LaFarge show last year as part of the 2013-14 season.

American roots artist, Pokey LaFarge, will open up the “Best Of” concert series at the Recital Hall when he and his band return to Eastern at 7 p.m. Sept. 15 in the Doudna Fine Arts Center.

Originally from Bloomington-Normal, LaFarge said playing in Central Illinois is always special to him.

“The Midwest is a part of me and there’s something that, when I play around there, makes me want to play my best for people there that are like me,” LaFarge said.

In fact, LaFarge said, the communities that make up the Midwest are those of a special breed.

“It’s nice in the Midwest, people don’t get too crazy or too rowdy,” he said. “There is a certain connection that is hard to explain.”

LaFarge also said that he believes Midwesterners are more accustomed to his genre of music.

“People are more open to my type of music specifically because of where I come from and things I’ve said,” he said.  “I like to think people take pride in the things I’m doing, going out there and representing the Midwest.”

Doudna also presented Eastern and the Charleston communities with a Pokey LaFarge show last year as part of the 2013-14 season.

LaFarge noted that he was excited to return to Charleston and see what the town will offer this year.

“I’m so happy that y’all have a theater for the town and the college,” he said. “Everyone there is so nice and so gracious, from meeting the crew to the autograph signing.”

This year, LaFarge is bringing some special guests to perform as well.

“The Central Time Tour will feature four opening bands and each band is completely different from the other,” he said.  “That was the goal of the tour, to have a variety show of American roots musicians that are kind of on the underground scene that will be a surprise to people.”

The tour will also feature Dom Flemons of the Carolina Chocolate Drops, Joel Savoy & Co., the Root Lock Gang and The Tillers.

Dan Crews, the director of patron services at Doudna, said LaFarge was requested through audience surveys to return because of his unique genre of music.

“It’s hard to categorize what kind of music he plays. It’s kind of old-time, but it’s pure Americana story-telling,” he said.  “He’s taken his influences he’s had over the years and then made them his own.”

Students and anyone interested in LaFarge’s return can get tickets at the Doudna Box Office for $20.