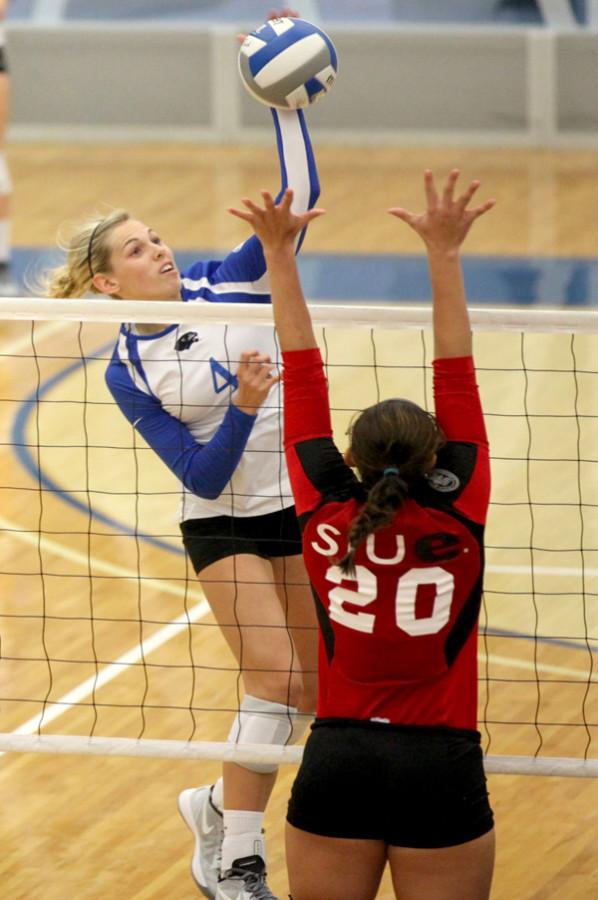 After a tough loss to end its season last year, the Eastern volleyball team is anxious to start its 2014 campaign. Friday’s match at Ball State will mark the first of four tournaments to start the season for the Panthers. After the release of the Ohio Valley Conference preseason rankings, the Panthers were ranked second, a fact that seems to have motivated this year’s team.

“Last year was a solid season, we played really well at the end of the year when we won nine in a row,” head coach Kate Price said. “The last loss to Eastern Kentucky at the OVC’s was tough, but any loss has that heavy effect on you. No loss is more difficult than another, and we’re much more focused on this coming season.”

The Panthers lost Reynae Hutchinson to graduation, but in Price’s eyes, losing the rest of the senior class was another tough pill to swallow.

“Losing Reynae, Amy Martin, and the rest of that class left a huge void in our lineup, which we’ve done a good job of trying to fill in the last few weeks,” Price said.

Two members expected to shine for this year’s team include juniors Marah Bradbury and Chelsea Lee. Bradbury, a setter, has been named to the All-OVC team for the second straight season and led the OVC’s in assists last season with 1,304.

“I have to give a lot of credit to my teammates,” Bradbury said. “I’m involved in a lot of plays with them, and I couldn’t do anything that I do without them. It involves our whole team, what we have, to follow our strategy on the court.”

Since Hutchinson’s departure from Eastern, Bradbury has stepped up as the team’s leader.

“I always try to be the leader on the court, since I’m always on the court. I think people respect that, and we all work hard together,” she said. “However we’re all stepping up, and taking on new roles, so others will start to step into that role.”

Lee was another Eastern representative on the All-OVC preseason team, as she compiled 356 hits, ranking seventh in the OVC from the outside hitter position. She also posted a .265 hitting percentage and 111 digs.

“It’s a real honor to be ranked second overall, but that’ll motivate us to finish the year on top,” Lee said.

Bradbury and Price agreed that the team hopes to win the OVC regular season championship, and host the OVC tournament right here in Charleston.

“I remember watching Reynae play last year, and being in absolute awe at how good she was,” Brown said. “She’s been an inspiration to this program, and I hope I can continue that legacy throughout my time here”.

Brown comes in as an outside hitter, which is where Hutchinson vacated following last season.

“I don’t expect Maria to take on that role at this moment,” Price said. “She’s shown good ball control, which is what we’ve been focusing on lately, so eventually she should end up making a good impact for us. Hopefully Dakota Springer, Stephanie Wallace, and Kelsey Brooke continue to produce their great efforts, until Maria is ready to step up”.