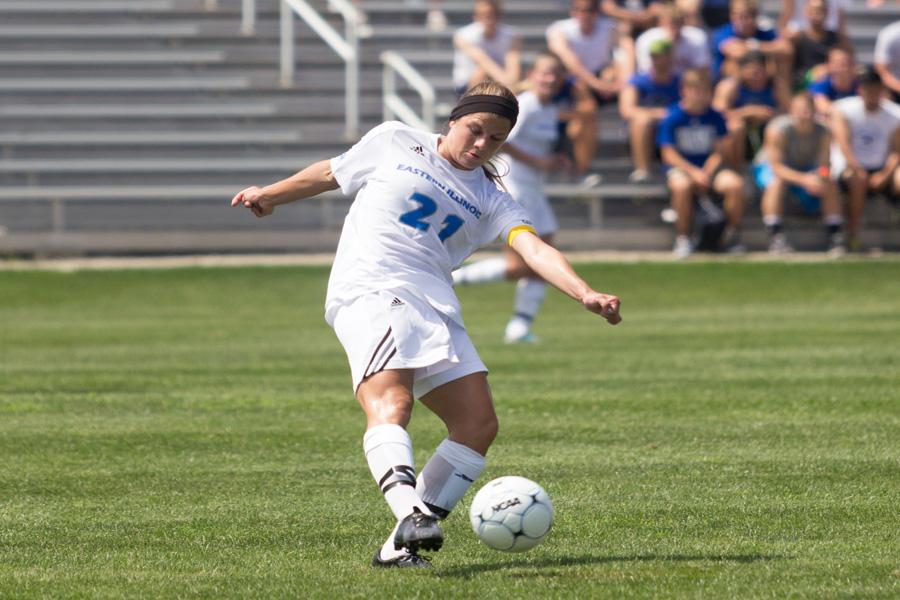 Megan Radloff, a senior forward, attempts to move the ball upfield against Indiana State on Sunday at Lakeside Field. The Panthers lost 2-0.

Despite the 0-2 start, Eastern women’s head soccer coach Jason Cherry knows there is still a lot of time for the Panthers to turn it around.

“Our team works hard and they don’t quit and that’s a great foundation to start with,” he said following Sunday’s 2-0 loss to Indiana State. “It’s a process trying to figure things out again and get ready for conference play. I’m still pleased with our team and our effort.”

Eastern still has seven matches before it opens Ohio Valley Conference play on Sept. 26 at home against Southeast Missouri, a team that blanked the Panthers 4-0 last October. The non-conference schedule continues this weekend with Eastern hosting Conference-USA opponents Marshall and Louisiana Tech on Friday and Sunday, respectively. Both matches have 1 p.m. start times.

After Sunday’s loss, Cherry said execution would be a key focus in practice this week. The Panthers managed just one shot in the first half against Indiana State. The Sycamores put a total of 10 shots in front of goalkeeper Emily Hinton in the first half, while scoring the only two goals of the match in the process.

In the second half, Eastern had four shots in the final 30 minutes, half of them coming from last year’s leading scorer Meagan Radloff.

Radloff, entering her senior season, was an All-OVC first team selection last year and finished in the conference’s top five goal scorers. Her seven goals in 2013 was a career-high, having just one goal in her first two seasons at Eastern.

Neither Eastern nor Radloff has scored a goal yet this season, but waiting for points is something Eastern has seen before.

Last season, the Panthers scored just two goals in their nine-match non-conference schedule, finding themselves on the wrong end of a shutout seven times before recording their first win on the road against Belmont.

Radloff scored her first two goals of the season in the same game, helping Eastern upend Tennessee Tech 4-2 at Lakeside Field on Sept. 29, 2013. That was the start of Radloff’s hot-streak, as she scored game-winners in Eastern’s next two matches, helping bring Eastern to its first 4-0 OVC start in more than a decade.

Radloff’s two shots against Indiana State are her only two so far this season. The team’s shot leader is red-shirt senior Lauren Hoppensteadt with three shots and two on goal.

Hoppensteadt, of Oswego, was a 2013 All-OVC second team selection, and like Radloff, is one of Eastern’s team captains this season.

“They’ve been great leaders so far,” Cherry said. “Those are our two hardest working kids every day. They hold people accountable. They’re an extension of me, they’re very loyal and they work hard and they’re going to do what’s best for the team.”

Belmont is the only OVC team with two non-conference wins so far this season. The Bruins, who finished in seventh place in the conference standings last season with a 7-8-2 record, got off to a 2-0 start with wins over Middle Tennessee and Valparaiso last weekend.

Freshman forward Belicia Mendiola scored two goals in her collegiate soccer debut for the Bruins against Valparasio, giving them the 2-0 win on Friday. Mendiola came through again on Sunday, scoring the game-winner in overtime against Middle Tennessee, giving Belmont the 1-0 win.