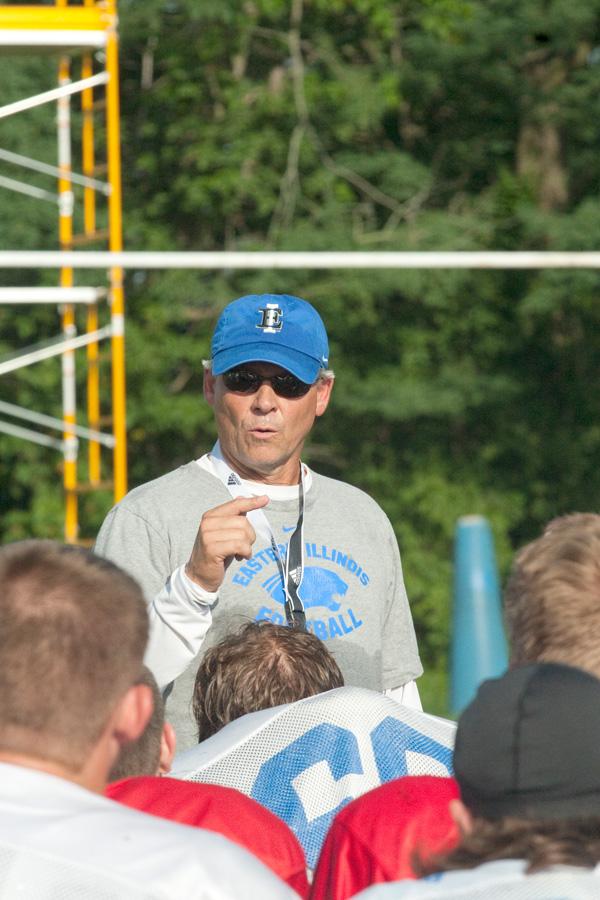 Kim Dameron gives a speech to his players at the end of practice on Thursday near O'Brien Field. Dameron enters Thursday's game against Minnesota as a first-time head coach after being the defensive coordinator at Louisiana Tech last year.

When Kim Dameron, Eastern’s head football coach, sets foot on O’Brien Field he is taken back in time. He is a fourth-grader at an Arkansas YMCA playing little league football in pads bigger than his body, his father coaching on the sideline influencing him in a way that would define Dameron’s career.

From the time Dameron was born, the presence of competition and athleticism in his life was almost pervasive. Each sport his father coached, Dameron played as long as he could get away with it.

“I just remember how I just loved getting out and being able to compete,” he said.

Beyond gaining an appreciation for competition, Dameron’s athleticism exposed him to leaders, to whom he attributes much of his success.

With this season marking his first return as an Eastern coach since 2000, Dameron has spent the last 14 years accumulating qualities displayed by his previous coaches, and intends to exercise them on the field.

“Being able to motivate them and mentor them and bring them along not only on the football field but in the classroom and in life in general – that’s, I think, what coaching is,” Dameron said. “That’s the way I was raised and the coaches that I’ve played for and responded to the most and the best were those kinds of guys.”

No matter the sport, one core value supports the discipline Dameron practiced in his younger years, and expects his players to reflect in their own athletic careers.

“You don’t put in the work that these guys put in to play this game if you don’t love it,” he said. “You just find a reason to not do it.”

Without an intangible motivation to play, not even a full scholarship is enough encouragement to practice with full gear in mid-August, or miss out on the extracurricular, and social opportunities that are restricted by the games’ lengthy time-commitment, he said.

Dameron is experienced enough to offer his players tough love if necessary, believing in a driving force within each great athlete to pursue something if it feels natural.

Growing up, Dameron watched the NBA’s Utah Jazz games wide-eyed, with every intention of growing up to become the team’s point guard, John Stockton.

“I wanted to be a guard,” he said. “I went to basketball camp every year of my life.”

In Arkansas little league, Dameron was often the biggest player on the field, but as his athletic career progressed, his growth stunted at 5-foot-9, a disappointing eight inches shorter than the 6-foot-5, adult doctors expected him to become.

“My dad was more of a basketball coach than anything,” he said. “I just never really developed the love for that game like I did football.”

A scar left on Dameron’s right knee is reminiscent of the high school track career he boasted until tearing his MCL in a long jump spill in March 1979.

“I had surgery, and I was in a cast for nine weeks and I started baseball in the middle of July and in August I started football,” he said.

Football is the only sport in his life Dameron regards as a sort of inescapable fate.

For Dameron, Eastern has been a consistent source of fond memories and life lessons.

“My wife and I got married here,” he said. “Charleston is meaningful to us and Eastern is important to me.”

Between his marriage and the familiar view from the sidelines, watching Eastern’s players is enough to make Dameron nostalgic for a time he shared similar ambitions.

“All of them are here because they chose football or football chose them or both,” he said.

Eastern’s football team is entering the current season with new coaches, new quarterbacks, high hopes and an uncertainty of expectations. In this time, Dameron turns to the example of his former coaches, Blackie Bond and Jesse Branch, and former colleague, Bob Spoo.

“Those are probably the biggest early influences which got me to the point where I got my first college job and started moving around,” he said.

In the upcoming season, Dameron hopes to not only lead his team to victory, but also to instill in them the importance of good leadership and forming good relationships.

“All of those experiences mold you in some way. Not all experiences are positive. Some are negative,” he said. “You just have to take the good with the bad and always look back and take everything in your past, always try to take it as a learning experience.”