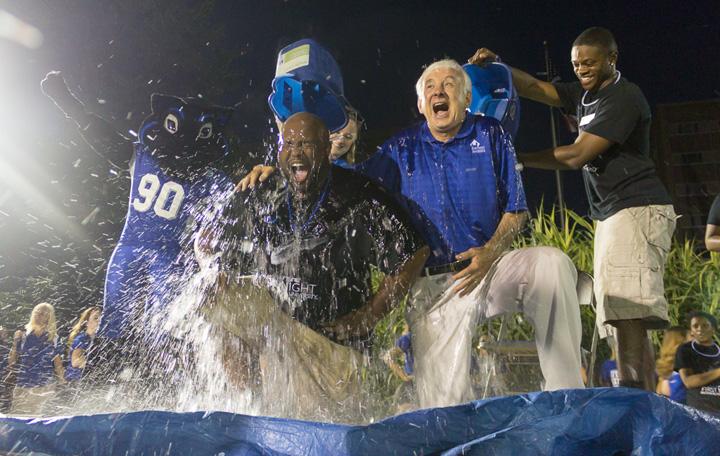 Jason Howell | The Daily Eastern News  Omar Soloman, an admission counselor, and President Perry, take the ALS Ice Bucket Challenge as the crowd looked on during First Night on Sunday on the South Quad.

“We been here since last Sunday at 9 a.m. and been practicing 13 hours since then,” said

Hightower said this was his first time guest-speaking at First Night.

“I been a comedian for a year and a half, but EIU is like my home so I come here whenever they need me,” Hightower said. “This is my university; I am EIU.”

The introduction continued with President Bill Perry, who was asked to do the ALS ice bucket challenge.

Those challenged are to dump a bucket of ice water over their heads and donate money to the ALS Association, which funds research of the progressive neurodegenerative disease Amyotrophic Lateral Sclerosis.

Reggie Thedford, the student senate president, and other senate members gathered as Perry and Solomon prepared for their challenge.

They both daringly received a heavy bucket of ice water.

“The ice bucket challenge was something different,” Perry said. “Reginald called me to do it so I said OK.”

As his last year as president, Perry said he would miss the school spirit as students gather to kick off the year.

“Being the last year definitely feels different,” Perry said. “Just because I will no longer be president does not mean I cannot come back as an audience.”

Spoonhour was also summoned to do the ALS ice bucket challenge, and he complied.

“I had a friend who died from ALS,” Spoonhour said. “Social media has been unbelievable with this.”

He also stated that the ALS cause has been a success.

Amie Hansen, the director of the Blue Crew, asked the crowd to come out and support their sports teams.

Thedford said he was happy with the turnout.

“We been promoting our spirit campaign,” Thedford said. “Looks like a lot of people wore blue today.”