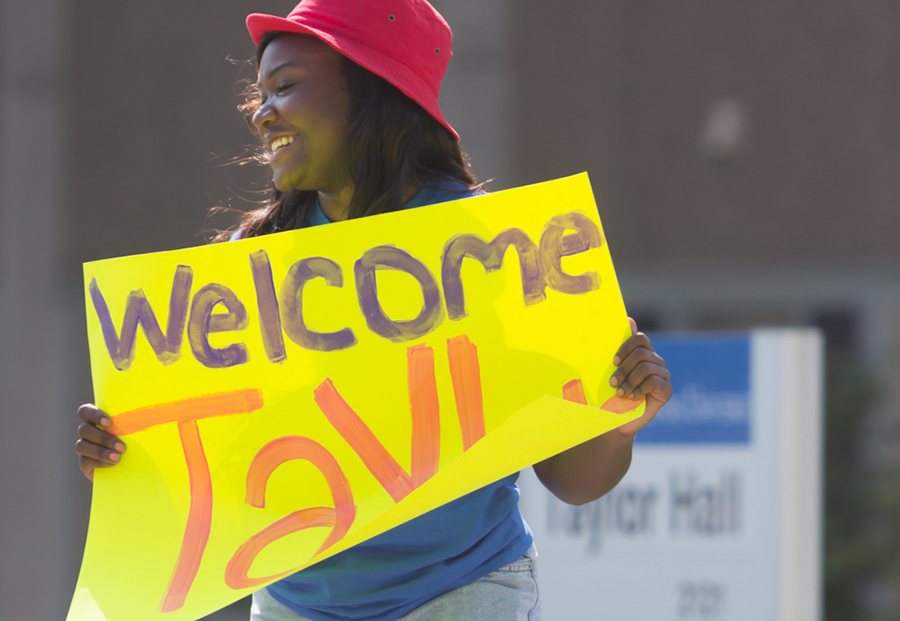 Ashley Howard, a senior psychology major and member of Delta Sigma Theta sorority, helps students in the Gateway Program move into Taylor Hall on Tuesday. The Gateway Program is an admissions program for students who do not meet the regular admissions requirements. Mark Hudson, director of university housing & dining services, said that about 1,000 students will be moved in early once the residence halls officially open. Hudson also noted changes that returning students can expect, such as new bathrooms in Ford Hall, new water bottle filling stations in Tower Dining in Stevenson Hall and Resident Select, a free service streaming movie service.

Amid the heat and humidity, members of many organizations set aside their phones and free time to help the students in Eastern’s Gateway Program move into their respective residence halls Tuesday morning.

Gateway is a program designed to allow students into Eastern who do not meet the required level of admission.

This is the first time the National Association for the Advancement of Colored People hosted the event, officially called “NAACP presents Gateway Program Early Move-In Day.”

Corinthian Bethel, the NAACP president, said move in was a success and a great way to encourage the students moving in to build relationships and get acquainted with some of the organizations on campus.

He also said the staff members from various organizations would ask the students moving in a series of questions to get to know them.

“We’re doing this because we care,” Bethel said.

Bethel said around 10 members from each of the participating organizations assisted in helping the students move in. Organizations such as TRiO, Kappa Alpha Psi fraternity, Minority Student Health and many others were present.

Throughout their busy morning, many students from the various organizations were lifting boxes and pushing carts, piled high with items, in and out of residence halls.

Standing off and away from the chaos of students moving in was Ashley Howard holding a bright yellow sign welcoming students into Taylor Hall.

Howard, a senior psychology major and member of Delta Sigma Theta Sorority, said she had one of the easiest tasks.

“So I’m kind of a move-in GPS—I tell them where to go,” Howard said. “I like it because I get to smile a lot.”

Howard said she was acting as the welcome-back face for the campus, which was true as a woman stopped her car to ask for directions to Thomas Hall and Howard told her where to go.

Orlando Thomas, a senior kinesiology and sports studies major, said one of the reasons the event was getting so much success is because students in Gateway never have any help moving in, so this is a way of alleviating their move-in-day stress.

“It takes a lot of the hassle off the parents and it helps out the students and everyone else,” Thomas said.

Sandra Harris, a parent of one of the students moving in, said the event helped cut the move-in time in half and took a lot of pressure off her family.

Bethel said, with such a successful move-in day, he is hopeful to make this event an annual one.