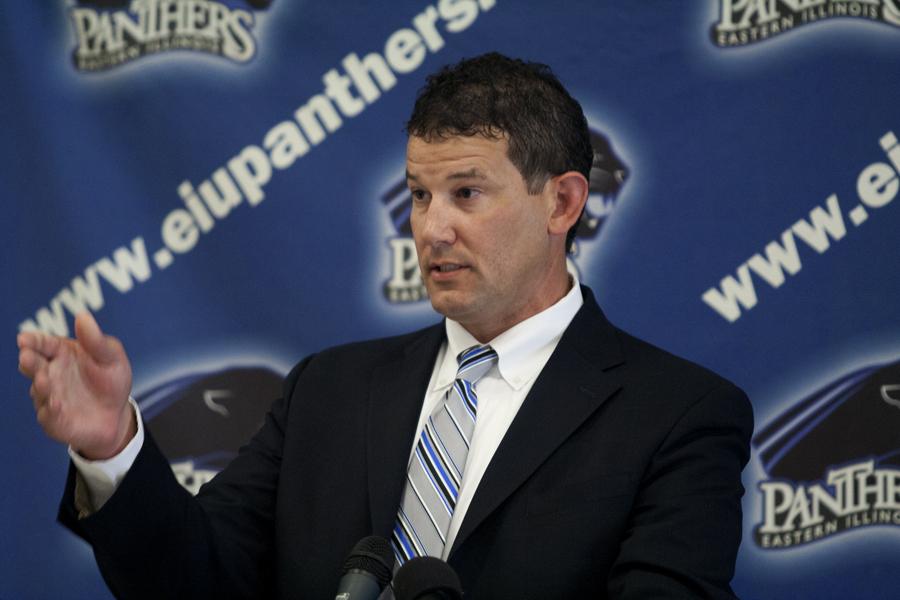 Tom Michael was introduced as the new athletic director Tuesday in Lantz Arena. One of Michael's goal is to enhance the experience as a student athlete.

Emotion swelled up inside Tom Michael, forcing him to stop for a moment during his introductory speech Tuesday, as he formally accepted the position of Eastern’s athletic director.

Commenting on how he is honored to be Eastern’s 10th athletic director – the position placement was announced a little more than a week ago – Michael also gave the audience insight to one other reason for his emotions that day.

His father Bob died 15 years ago to the day, Michael told the audience as he thanked him, as well as his mother and others in attendance.

President Bill Perry assured the audience Tuesday that Michael was the right man for the job, citing one of Michael’s personality traits as reason enough: integrity.

For Dan Nadler, the vice president for student affairs, choosing Michael came down to three components: Michael had competed at the highest levels in high school and college, his will to enhance the student-athlete experience and his experience in the administration level.

Michael echoed these sentiments, reaffirming his desire to work on the student-athlete experience while athletic director.

Michael added that as athletic director, he knows the top priority for the students is academia and what it means for student-athletes to walk across the stage with a “meaningful degree” in hand.

“I want everyone to know that academic achievement is the top priority,” he said.

Michael also spoke of a desire to expand the experience into the community as well, by implementing a plan to do so, one which he said he will invite the community to join – even if it is as simple as buying a ticket to a game, meet or match.

Perry said he was also taken away with Michael’s commitment to enhancing the student-athlete experience at Eastern.

Michael knows who to recruit, what the student-athlete should do to graduate and achieve excellence, and what opportunities are at Eastern, Perry said.

But Michael is not stepping into the position lightly and knows it will take a little while to get a full grasp on everything.

“I’ll be walking in just like any new employee: with my eyes wide open and listening and learning,” he said.