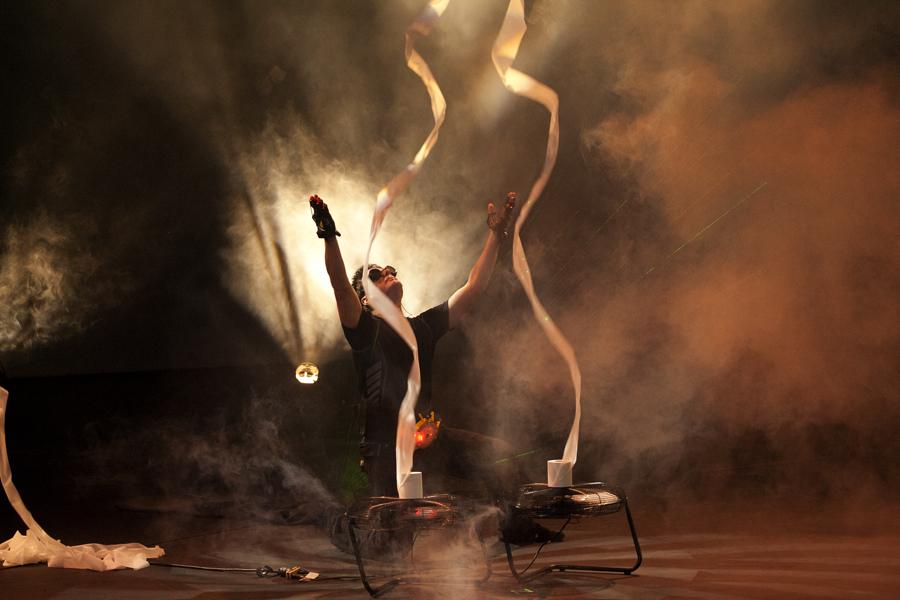 Mark Nizer performed a show filling the audience with laughter and intriguing them with his juggling at Eastern Saturday night.

The performance took place in the Doudna Fine Arts Center, as a part of its summer selection.

The 53-year-old professional juggler has been practicing for 46 years.

He expanded his line of work to accompany lasers and comedy.

Nizer has performed in many shows across the world as well as won international juggling contests.

Before the show, Taylor Kovach, 8 years old, was excited and didn’t know what to expect from the show.

Her family had heard about the show from her grandfather, Don Stumpf, who works at Booth Library.

The pre-performance, occurring while everyone was taking their seats, gave a good indication of what was in store for the rest of the night. A screen played images as the audience sat down. The images were of magic tricks and light-filled illusions. Throughout the show, Nizer entertained his crowd by juggling various object including balls, sticks, machetes, cigar boxes, and even a bowling ball along with a lit propane tank and an electric carving knife.

Nizer also impressed the crowd by showing off his skills with making a performance out of lasers. The lasers gave the illusion of a 4-dimensional show. Nizer incorporated comedy throughout his show, giving a family-friendly performance. He was never short on jokes throughout the performance.

To captivate the audience, Nizer threw changeups into his routine such as dancing, short comedic movie clips and glow in the dark skits.

Nizer kept the energy going throughout the night, even as he juggled 15 ping pong balls using his mouth, or when he juggled two machetes and an apple, and still managed to eat the apple in mid juggle.

The crowd cheered after Nizer won a musical duel against Siri by bouncing the balls on an electric mat in mid juggle.

Nizer kept his crowd involved by asking up three random audience members to help him with a couple of his tricks.

Colum Dillon, one of the members asked up to the stage, said the experience was “fun.”

“It was real sweaty up there,” he said.

Nizer never stopped moving throughout the performance. At one point in the show he was monitoring his heart rate for the crowd to see. He always had something new for the audience to immerse their focus on.

At the end of the show, Nizer wanted to emphasize his overlying theme of the night: everyone should do what makes them happy in life.

Juggling makes him happy, and he wants everyone to find that feeling for themselves, Nizer said.

Deanna Tadlock can be reached at 581-2812 or dennewsdesk.com.