The Blooming of the Corpse Flower: Tropical flower to bloom with rotten odor 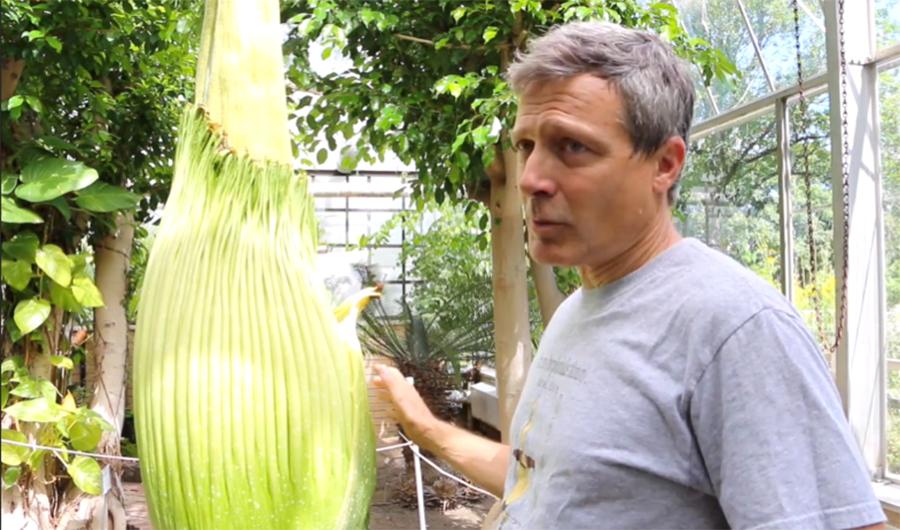 Steven Malehorn, greenhouse manager since 1998, predicts the corpse flower to bloom either Friday or Saturday morning.

Malehorn will be there from when it starts blooming in the afternoon until midnight answering questions people who come by my have for him. The flower only blooms for 24 hours.
For those who do not want to smell the flower’s decaying flesh odor, there is a live feed of the flower.

Guests are welcomed at the greenhouse to view the corpse flower and to smell the odor.

“The smell is intense,” Malehorn said. “You won’t smell it as much as taste it.”

The corpse flower can be smelled up to a mile away with the intense odor of dead animals.

“It’s like road kill in a dumpster,” Malehorn said.

In its natural habitat of the Sumatra rainforests in Indonesia, trees and shrubs surround the Corpse flower, which makes it hard to pollinate.

The corpse flower produces the odor to attract flies to help pollinate it when blooming.

Malehorn received the seed from the University of Wisconsin-Madison in 2001 after their own corpse flower bloomed in 2000.

Malehorn planted his corpse flower seed and it bloomed in 2008 and has bloomed every two years since then.

“The better you treat them the less likely they will bloom,” Malehorn said. “Giving them perfect water, soil, fertilizer, temperature, light, corpse flowers wouldn’t see any reason to bloom.”

Corpse flowers are from the tropical region and can grow 10-12 feet with plenty of room to grow but won’t bloom for 10-15 years.

“They are an endangered species because it is losing its habitat to deep forestation and the growth of civilization,” Malehorn said.