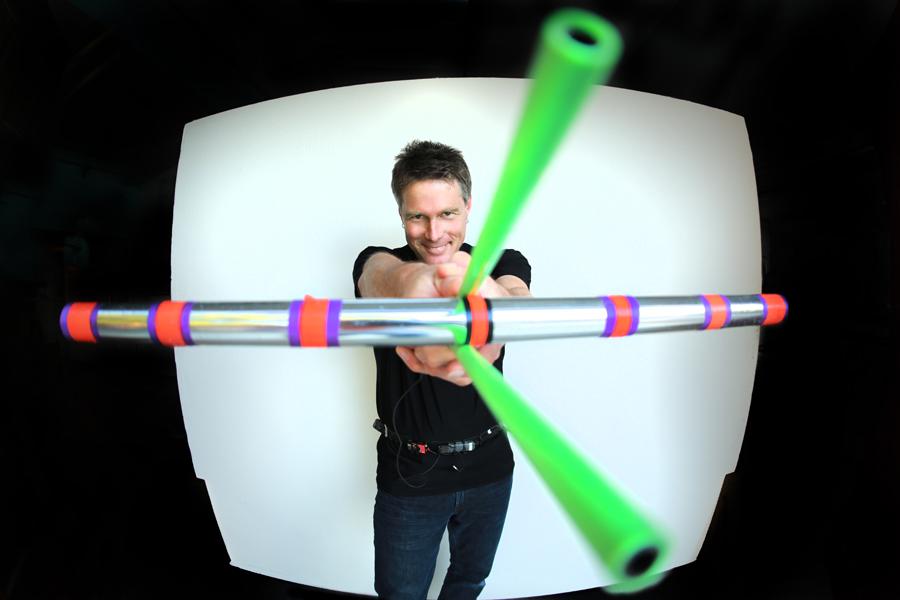 Mark Nizer a 4D performer who works with laser and juggling will be performing at Eastern Saturday July 12.

Mark Nizer has made a career immersing his audience in 4-D lasers and comedy.

Nizer will be bringing ping pong balls, burning propane tank, a running electric carving knife and a 16-pound bowling ball and more to Eastern, giving the audience a show of juggling and lasers, produced at 4-D quality, with the help from 3-D glasses.

Nizer will perform at 7 p.m. July 12 in the Theatre of the Doudna Fine Arts Center, and 3-D glasses will be provided.

Crews said he attends different conferences and is in contact with many agencies.

“Mark Nizer is top class with five stars across the board.” Crews said. “He will be enjoyed by all ages.”

Along with the performance, there will also be dinner served at 5 p.m., which is included in the ticket price.

“It wouldn’t be wise to show up 10 minutes before the show to eat because everything would be gone.”

Nizer started juggling at age 12 by attending an adult class.

“Mom signed us up because we had too much energy, and I fell in love with it,” Nizer said.

He then mixed his juggling skills and comedy with laser and video editing, which gives the illusion of four dimensions, surrounding the audience in many colors, and laughs, Nizer said.

Nizer has won international juggling championships and has performed at many colleges and military bases around the world, as well as performed at The Kennedy Center in Washington, D.C., and The Lincoln Center in New York City.

“I love what I do and I love sharing my work with people,” Nizer said. “The good thing about comedy is that there is no limits to what funny is.”