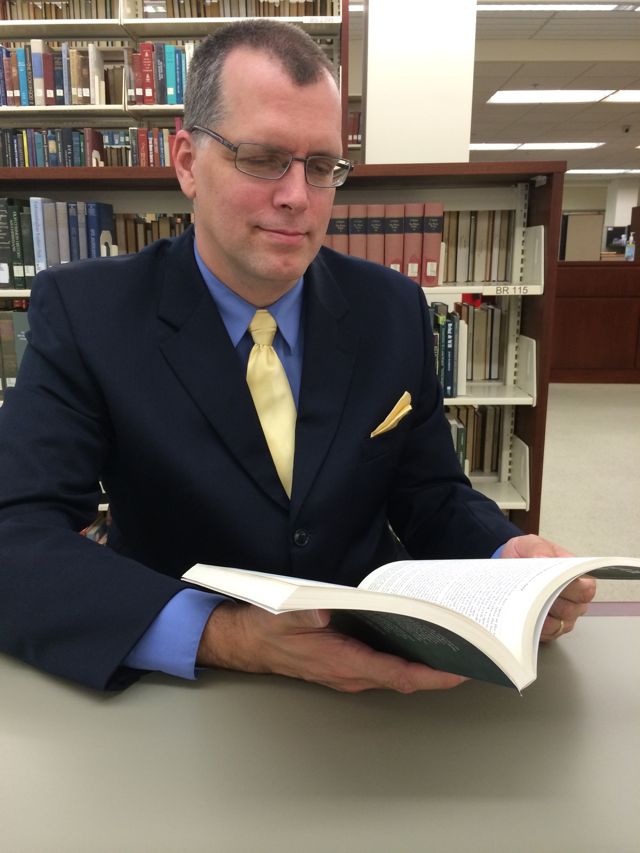 Professor Tolppanen reads his published book Churchill in North America,1929. A Three Month Tour of Canada and the United States.

Bradley Tolppanen, a professor of library services, published his first book “Churchill in North America, 1929. A Three Month Tour of Canada and the United States.”
The book took four years to write and is 250 pages on Churchill’s trip to North America in 1929.
Tolppanen said he always had an interest in history and specifically found Winston Churchill fascinating.
He said he was writing the book when he could and took his time.
“It was never something I stressed over or felt pressured into doing,” Tolppanen said.
Tolppanen has been writing articles on Churchill for years, but hasn’t come across a topic worth writing a book over.
Speaking about the book, Tolppanen said, “It evolved from an article I did on Churchill and Chaplin’s friendship.”
“I thought it would be a more interesting as a book rather than an article.”
When trying to research Churchill’s trip to North America, Tolppanen noticed it was an unstudied area of Churchill’s life.
“I thought there would be enough information for a book when pulling sources,” he said.
Tolppanen said that he didn’t follow the exact trip but managed to go to some cities and towns to look through sources.
Sources consisted of front-page news articles and personal letters Churchill would write to his wife in England during his trip.
He was lucky to find one or two letters at a library that actually referred to the trip.
Tolppanen said that this specific trip was for Churchill’s pleasure.
Churchill hadn’t seen North America for 30-plus years and decided to come back to visit.
Tolppanen wanted people to understand that Winston Churchill wasn’t all about politics or profit, but he was down to earth and enjoyed travelling like anybody else.
He wanted people to see Churchill’s life 10 years prior to WWII.
Tolppanen made this book for all the Churchill enthusiasts and people who enjoy history in general.
“I want people who enjoy history or Churchill to learn something new about him.”
Tolppanen plans on writing more articles on Churchill; as for making another book he just hasn’t found the right topic.