The Eastern football team will return home for the first time in two weeks to continue their Ohio Valley Conference schedule.

The Panthers are seeking their first OVC win, against the Eastern Kentucky Colonels who are coming to town for Family Weekend.

“It’ll be a real test for us, no question about it,” Eastern Head Coach Bob Spoo said.

Spoo said the inexperience on the Panther roster is part of the reason for the team’s recent struggles.

“It turns out that teams have gotten better than us, and we’re not as experienced as some of these other clubs,” Spoo said. “They’re getting the job done and we’re not.”

The Colonels enter the game with an overall record of 1-3. They, like the Panthers, are seeking their first OVC win, currently holding a conference record of 0-1.

The Colonels lost to Austin Peay by a score of 23-17 and are coming off of a bye week. The Colonels have also lost to Kansas State and nationally ranked Chattanooga but beat Missouri State in the second week of the season.

The Panthers are coming off of their fourth straight loss, falling to Southeast Missouri last week.

Eastern is currently in last place in the OVC standings, while Eastern Kentucky is in seventh.

The Panthers and the Colonels are two of three OVC teams who have yet to win a conference game, with Tennessee State being the third.

Eastern Kentucky has a defense that is among the best in the conference, currently averaging 356.2 yards of offense allowed per game.

Last week against Southeast Missouri, the Panthers allowed over 400 yards of offense from the Redbird rushing attack alone.

Junior defensive back Brooklyn Fox and sophomore linebacker Ichiro Vance both stand in the conference’s top 10 leaders in tackles for Eastern Kentucky. Eastern’s red-shirt senior linebacker Cory Leman is the OVC’s No. 3 tackler.

“(Eastern Kentucky) is playing excellent defense,” Spoo said. “They seem to be struggling offensively for some reason I don’t understand why. But they’ve got a quarterback that has burned us the last couple of years.”

The rushing attacks of the Panthers and Colonels currently stand as the conference’s worst, with Eastern in last and Eastern Kentucky right about them. Neither team has a running back among the OVC top ten, but sophomore quarterback Jimmy Garoppolo is the conference’s second best passer, currently throwing for 1,220 and 11 touchdowns so far this season.

Kickoff is set for 1:30pm on Saturday at O’Brien Field.

Dominic Renzetti can be reached at 581-7942 or [email protected] 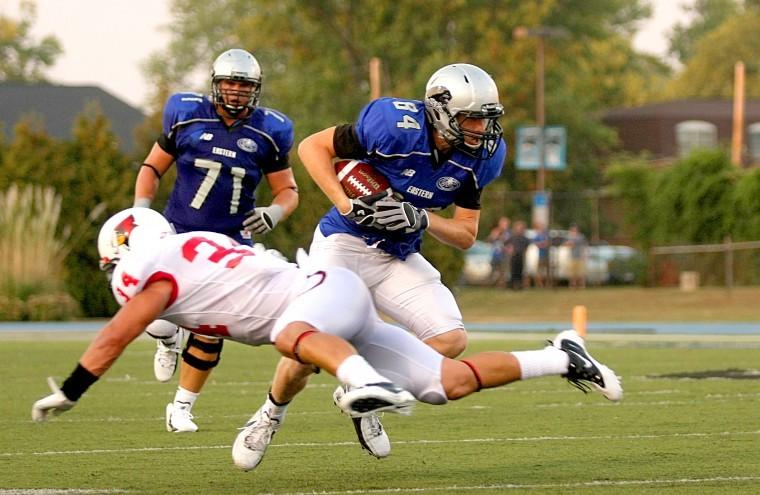 The Eastern football team will return home for the first time in two weeks to continue their Ohio Valley Conference schedule.