Paperny speaks about life behind bars

To convicted felon Justin Paperny, reevaluating his decisions was “the best part of prison.”

Paperny, an author and former white-collar criminal, spoke to Eastern students at the Lumpkin Hall Auditorium.

In 2007, Paperny pleaded guilty to one count of conspiracy to commit mail, wire and securities fraud by helping the hedge fund manager to steal about $2.5 million from investors while working as an account manager for UBS, The L.A. Times reported.

As a result of this crime, Paperny served 18 months in federal prison.

The School of Business and the International Honor Society Beta Gamma Sigma sponsored the event, which drew large numbers.

Paperny was brought to Eastern to lecture on the issue of business ethics which, given his background, he is well qualified to speak on.

Paperny’s presentation tells the story of someone who fell into the pitfalls of corporate culture.

“I treated people differently based on what they did for me,” Paperny said. “It’s not illegal, but it is certainly unethical.”

Paperny started his career at Merrill Lynch before moving to a smaller firm, Crowell Weedon and then to Bear Stearns. From Bear Stearns, Paperny and his business partner moved to UBS, where he worked until his scandal erupted.

White-collar crime can be classified by three major actions: lying, cheating and stealing, according to the FBI.

At the beginning of his career, Paperny said he quickly became accustomed to the lifestyle afforded to him by corporate culture.

“All I did was work and think about money,” he said. He later continued, “I was just about willing to do anything to be paid.”

During his lecture, Paperny made note of the proverbial “slippery slope” that befalls people in his position.

“Without a strong core or center to guide myactions, I easily crossed the line from unethical to illegal behavior,” Paperny said in a blog entry. “In prison, I learned that moral lapses areinsidious, subtle and continuous.The more I stretched the truth themore I had to keep up the act, which is why one lie leads to another.”

From jail, Paperny wrote a blog chronicling his life in prison and what had put him behind bars in the first place. After receiving responses from his blog, Paperny made the decision to write about his experience.

The result was his first book, “Lessons From Prison,” later followed by his second book, “Ethics in Motion.”

DePaul University and St. Mary’s University are integrating “Lessons From Prison” into the curriculum, according to Paperny’s own webpage.

The presentation sparked audience participation during the question and answer session.

Katie Bosch, a senior management information systems and accounting major, said she enjoyed the presentation because it was something different.

“It’s a good perspective to hear,” she said. “(Pareny said during his presentation) ‘I would never ever think I could do something like that,’ but it proves that you never know what is going to happen.”

Paperny speaks about life behind bars 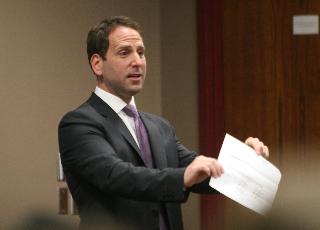 Justin Paperny; author and former white collar criminal; refers to an e-mail used as evidence to convict him. (Seth Schroeder